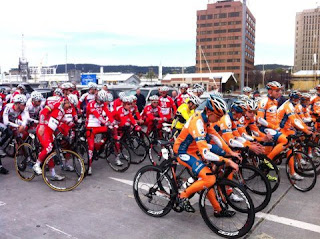 Day 1 of the Tour of Tasmania saw all riders participate in a ‘Tour Parade’ to the Cascade Brewery where the start of the opening stage would begin. A Team Time-Trial up Mt Wellington would test the legs over the 18km ride to the summit with weather conditions almost perfect. With a late call up to the team, I tried to find my climbing legs and support the team as best I could in what would be a difficult stage. The team also included Anthony Giacoppo, Jono Lovelock, Ben Dyball, Sam Davis, Campbell Flakemore, Nathan Earle and Jai Crawford. 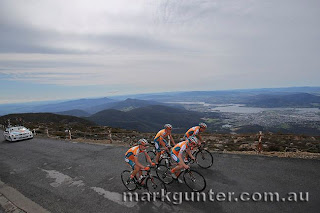 From the start, I rode a solid tempo for the first 5 mins but that was all I could give as I watched the strength of the boys ride off into the distance. I was disappointed not to help out anymore, but when a 78kg sprinter is trying to pace a 1st class team of climbers up a mountain, there is only so much you can do I guess. With the team riding a very solid pace up the climb, I knew they would come close to victory. When I eventually reached the summit, I was told the news that the team had taken victory and set a new PB time up the climb which was an outstanding achievement. Dyball was first across the line and lead the General Classification after stage 1, a job well done by the boys, proving “Teamwork wins races”. 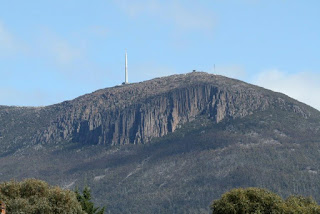 The weather was excellent for Day 2 with temperatures in the mid 20’s and lovely blue skies. The 125km tough stage was flooded with climbs which were steep and long enough to split the field apart. Covering the early moves and keeping our GC riders out of the wind and near the front was the job and we tried to do this as best as we could. When we got to the most significant climb of the day, a front group of about 40 riders rode away from the rest of the field. Jai, Campbell, Ben and Nathan were in the mix but got worked over by the other teams in the final 30km’s and were left to fight it out the finish line and limit their loses. We lost the overall lead at the end of the day and slipped back to 4th. It is not the end of the world but not how we would like it to be either. 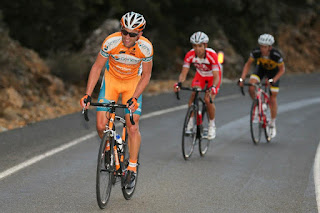 Day 3 began with a criterium just to add a change to the climbing stages already undertaken so far. On a wind affected course, the pace was high from the start and holding your position was difficult. Flakey was doing what he does best - driving it from the front to string out the bunch. A number of small breaks rode away but it was a solo attack which triumphed on the day. AJ managed to run 3rd after fighting his way onto the back of the Drapac lead out train. It wasn’t our best team performance but after some recovery we were ready to tackle the afternoon’s road stage. 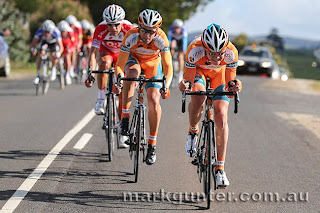 Open roads and lots of directional changes in the afternoon’s 99km road race made conditions harsh to say the least. The field was split to pieces in the first few kilometres because of severe cross winds. A group of 15 riders managed to break away with myself, AJ and Sam in the front group trying to keep our GC contenders safe in what was left of the bunch. After making the front split and feeling good, I was blown off the road by the wind. I jumped back onto the road and continued but it wasn’t long before another rider put his rear skewer into my spokes forcing me to stop and wait for a new wheel. The boys were still riding a good position in the lead bunch and I thought I was never going to get back to the lead group. A change in direction resulting in 25km’s of head wind brought all the groups back together and at the base of the final climb it was time for our climbers to shine. The boy’s rode well to contain their rivals as best as possible with Nathan finishing 2nd and Jai, Ben & Campbell not too far behind. 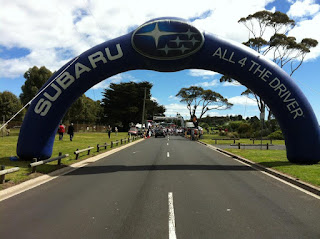 The morning criterium on Day 4 saw AJ finish in 2nd place in a hard fought sprint to the line. Flakey made numerous attempts to get up the road and succeeded around the halfway mark of the race. AJ was persistent at the front covering moves whilst the rest of the boys weren’t too far away. With 3 laps to go, Nathan, myself and AJ were in 2nd, 3rd and 4th spot perfectly positioned for the finish, but on the back straight with 1 lap remaining, we were swamped and had to fight our way back to the front. At the finish, AJ snuck around to finish 2nd and I finished a disappointing 9th. The afternoon’s 78km road stage was full of short steep climbs with added cross winds to splinter the field apart. Over the most difficult climb of the day we were represented by Nathan, Jai & Ben with Flakey just up the road in the leading breakaway of 8 riders. With a rolling 30km’s remaining to the finish after the steep climb, the boys rode strong in the front group with Jai finishing on the podium in 2nd and Nathan in 4th. Campbell and Jai finished with the lead group of 15 riders with the boys not losing any time on the general classification. Another tough day for the team but with 2 days to go, nothing is over just yet and we were not going to give up without a fight! 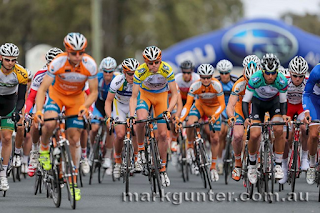 With just two days to go, riders were desperate to get hold of a stage win and the morning’s stage 7 criterium was fast and furious from the start. I was feeling good during the race and managed to hold good position spending the majority of the laps near the front. With less than 10 laps to go, AJ arrived near the front ready for the final sprint. With 3 laps to go Nathan was also at the front and the three of us set tempo. We were swamped with 2 laps to go but AJ and I held a strong position and on the final lap we were in the top 5. I was 2nd wheel around the final lap assuming AJ was right behind me but he wasn’t able to get my wheel and I ended up providing a perfect lead-out for eventual stage winner Ben Grenda, not what we wanted to achieve. I’m sure that next time we will get the job done, you need to learn from your mistakes. 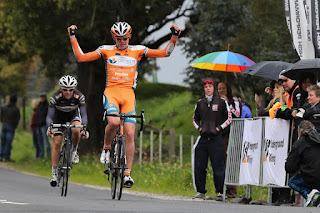 The Road Stage in the afternoon was a 77km hilly course through the beautiful farm’s which surrounded the area of Tasmanias north coast. A breakaway established after 25km’s and Campbell Flakemore rode smart to place himself amongst it. Drapac controlled the front setting the tempo despite Nathan and Jai’s attempts to split things up on the steep climbs. We held our ground leaving Campbell to get the job done, recording a fantastic stage victory. Jai, Nathan, Ben, AJ, Sam and I finished in what was left of the bunch. A stage victory by Campbell and a change in the Teams GC which saw us in the lead by over 2 minutes - a good day to say the least. 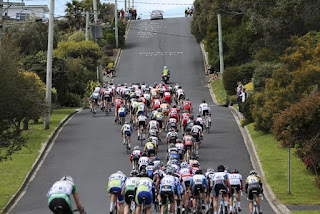 The final day of the Tour of Tasmania was once again welcomed by blue skies and sunshine to the joy of all riders. The race saw 12 laps of a 4.3km circuit be completed with the most challenging part of the course, a nasty 20% 300m hill climb. From the start the usual attacks lifted the pace of the main field and as a team, we did our best to keep our GC contenders safe in the bunch. Leading into the climb each lap it was important to stay near the front as the bunch would split on the climb. As easy as it sounds, not every lap would see this strategy be completed. A break of 15 riders escaped with 4 laps to go and Team Drapac controlled the move. We were content to follow our closest rivals right to the line and retain our Teams classification win. On the final lap, the leading group significantly slowed and the main field was within seconds. In the end, four riders escaped to take the placing’s on the stage just ahead of the main field, 30 seconds behind. AJ placed 5th in the stage and the Tour was won by Drapac’s Lachlan Norris. The Final GC standings saw Nathan place 3rd with Jai and Ben in 7th and 8th respectively. Andrew was happy that we retained our No.1 Teams Ranking and show our strength as a team as it continues to progress. 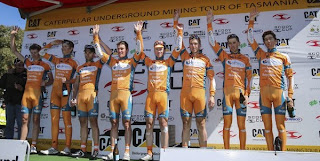 After a late call up to the Tour, I was pleased to be a part of our success and I really enjoyed the fraternal atmosphere our team provides, finishing the Tour with my skin still intact was an added bonus to. Big thanks must go to ACJ, Pricey, Nunny, Damo and Tim for keeping us on track throughout the Tour. To win another Team’s Classification takes a lot of effort and everyone in the Genesys Wealth Advisors Cycling Team appreciates the support of our loyal sponsors, so please make an effort to check out their link on my blog. A comfy pair of shoes is important for any cyclist during a long Tour and I thank Diadora for the products I’m fortunate enough to receive. Photo credit: Mark Gunter (www.markgunterphotography.com). The next race for our team is the historic 97th Melbourne to Warnambool 265km One Day Classic. We are hoping for some success as always but either way it will be another great weekend away racing bikes. Keep posted for the next race report, Cheers Brenton.