Grafton to Inverell One Day Classic

The final event on the 2012 National Road Series Calendar was the 220km Grafton to Inverell One Day Classic. With our bikes and gear packed we set off on a solid day’s travel of flights and car transfers eventually reaching Grafton later in the evening. It wasn’t an ideal time of the day to go for a ride however Nathan and I opted to build our bikes and go for a short ride, it was good to spin out the legs and do some exercise after a full day of sitting down in cars and planes. With the ride out of the way we joined the rest of the team at the local pub for an enjoyable meal capping off the day nicely. Pre-race day began with a training ride with the boys followed by a visit to the coffee shop, the weather was a very warm 30-35degrees, a bit of a change to the weather back home in Gippsland. A relaxing afternoon checking our bikes and preparing our race food was enough to keep us busy before we got an early night ahead of the big race. 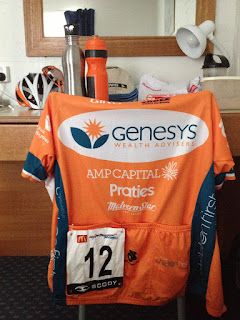 With the race beginning at 8am a quick boost of carbohydrates for breakfast we departed for the race start. Sign on, a final team discussion and the weather not as hot as predicted, racing conditions would turn out to pretty good. Under control for the first 10km’s, I was positioned right at the front ready to chase down any attacks for the team. It wasn’t long before the heart rate was screaming but for the first 30km’s we did a great job at controlling the race. When we were eventually happy with the early break the tempo slowed down and our 1st job of the day was complete with Jono, Sam and Ben all making the front split. They were joined by about 14 other riders and each of the major NRS teams was represented. Approaching the most difficult part of the race it was important to keep your energy levels up, SHOTZ Nutrition bars and gels provided us with a quick source of energy along with some whole foods (mini muffins and rolls) to fill the energy depleted body. Expecting the tempo to be slow we hit the climb at full speed and it was Budget Forklifts who led the charge up the climb. I was unable to hold the fast pace and eventually dropped off. Nathan, AJ, Campbell and Pat maintained their positions in the front of the bunch but couldn’t quite go with Budgets Mark O’Brien and Peter Herzig who rode clear on the climb and caught the breakaway. 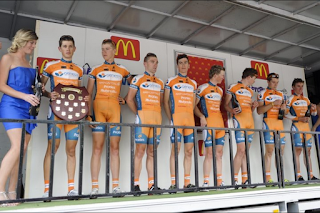 Approaching the finish attacks where intense and the boys did their best to control the dangerous moves. Unfortunately the boys up front missed out on the podium with team Budget dominating in a 1-2 finish. It was a difficult day of racing and although ticking all the boxes in the first 80km’s we were powerless in the final 150km’s. The end to the 2012 NRS season may not have been what we wanted but we were presented with the 2012 NRS Teams Classification Shield which was our reward for the season’s efforts. With no more racing on for the year it’s time for me to bring out the Golf clubs and the Surfboard and enjoy the short break. It’s been a successful 2012 season with my progression in this sport continuing to grow. I look forward to the opportunities that present as I prepare for an exciting new year with Team Genesys. A big thanks to all of my Team’ sponsors, Diadora Australia, Mum, Dad, my family and friends, coach Matt Wallace and to everyone who has had an impact in my development as a cyclist over the past few years. Keep posted for updates on my training and preparation for 2013.