The Melbourne to Warnambool Classic is one of Australia’s Premier Cycling Events and with a record 240 riders it was bound to be a tough race this year. Pre-race day was spent with my teammate and 2 time winner of the historic race, Joel Pearson. After a short ride including some helpful advice from Joel, we met the Minister of Sport and Recreation – Hugh Delahunty for a press conference and then a quick visit to AusBike Expo to meet some of our sponsors. 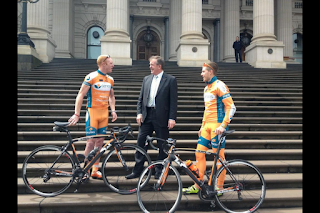 On race day, we were all set to go and after some breakfast to kickstart the metabolism and a short drive to the start, we were underway by 7:30am. For a race as long as this one it’s important to eat and drink every hour and make sure you stick to a plan. For today my plan was to eat solid foods once an hour with Gels and drinks in between, from the gun all riders and teams were aggressive with small moves going off the front of the bunch again and again. After 20km’s a crash held up AJ, Nathan Earle and a few other top riders from the major teams but they re-joined the peloton shortly after. At the 50km mark the first major break was established and I was in a good position to make the move myself. I was joined by around 10 other riders including 2 from GPM Racing, 2 from Drapac and 1 from Budget forklifts. Soon after making the break, I was told to just follow the wheels and mark the key riders as my teammates were on the front chasing us down. It wasn’t an ideal situation for us because the boys had to work hard to bring the break back as I was outnumbered. The conditions were windy with cross/head for most of the way and the odd shower or too. Approaching the major climb in Camperdown with 60km’s to go the main field of 50 riders had made contact with our front group of 10. To see my teammates back at the front was a good sign but the race wasn't over and we needed to ride hard to the finish line. 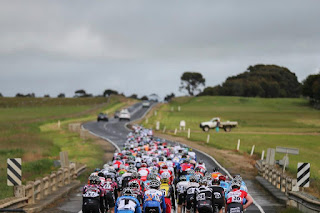 With 30km’s to go an attack by Drapac’s Floris Gooseinen and AIS rider Aaron Donnelly resulted in the boys riding away with 1st and 2nd. Team Budget led the chase and despite the added help from myself, Jai and Flakey in the closing stages but we were unable to bring the two riders back. Our best placing’s were Joel 5th and AJ 11th and we managed to take 2nd in the Team’s Classification and retain our NRS No.1 Team’s Ranking. We couldn’t have made it through the day without the help of our support team, so thanks to Andrew, Damo, Neil, Nunny & Pat who provided us with fresh bottles and food at the feed zones, serviced our bikes and gave us a massage at the end of the day. Following on from the Warnie the Shipwreck Coast Classic punishes riders over 120km’s departing from Warrnambool along the picturesque Great Ocean Road and returning to ‘Cheese World’. With the majority of the field having competed in the Melbourne to Warnambool it was clear that some earlier attacks were inspired by the ones with fresh legs. After a heavy crash in the Tour of Murray Pat Shaw was back in the bunch shouting orders as he does best. Our job was to cover the moves early and look after AJ for the finish. The winning breakaway was established after 25km’s and with it included myself, Nathan Earle, 2 from Team Budget, 3 from Team Drapac and 6 other riders. The pace was hard early on until the tactics between teams began to take control. The conditions were perfect for racing with blue skies and a little wind to spice things up. 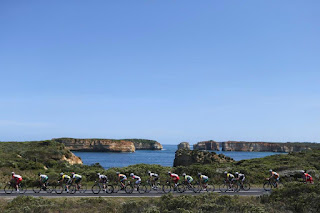 With 20km’s to go I had a rear spoke brake and had to get a wheel change from the team car. It wasn’t what I wanted but I jumped back on and got a short motor-pace from the team car back to the bunch. It’s a thrilling feeling to slipstream behind a car at 60-70kms/hr, but it’s never going to help your legs recover especially at the business end of the race. As soon as I re-joined the group the winning attack went. Drapac’s Reece Pollock and Floris Gooseinen were accompanied by 3 others and despite the short efforts to close the gap the 5 were gone, I was absolutely legless and couldn’t chase the break down. The last 15km’s were rode at tempo swapping off with Team Budget but in the end we were beaten by stronger riders who played better tactics on the day. With a few fresh legs sitting on our bunch at the end I had to settle with 9th & Nathan 10th which was well off our best performance and not what we expected at the beginning of the race. Another NRS weekend completed and it was great to spend time with my team talking tactics, drinking coffee and riding bikes, it’s always a good laugh. 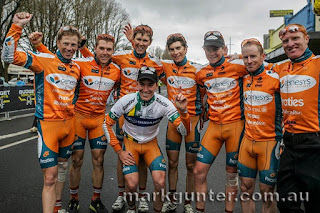 The Grafton to Inverell One Day Classic on the 27th October is the final event in the 2012 National Road Series and I look forward to racing with my Teammates in what will be a long but hopefully successful day in the saddle. With enough points separating 1st and 2nd placed teams leading into the final race, Genesys Wealth Advisors Pro Cycling have taken out the 2012 NRS Teams Classification and continue to hold onto our No.1 ranking. Thanks to all of our team’s sponsors for the support and products you provide, my shoe sponsor Diadora, to my family for your amazing support, I appreciate everything you have done for me. Also would like to thank my coach Matt Wallace for his time and effort. Photo Credits: Mark Gunter. Keep posted for updates and a race report to follow. Cheers Brenton