We arrived in the picturesque state of Tasmania to contest the next event on the National Road Series Calendar, the 208km Launceston – New Norfolk one day classic. The Genesys team of Nathan Earle, Jai Crawford, Anthony Giacoppo, Joel Pearson, Kane Walker, Sam Davis, Jonothan Lovelock and myself were all preparing for the tough day ahead with the challenging 15km Poatina Climb the stand out hurdle of the epic race. 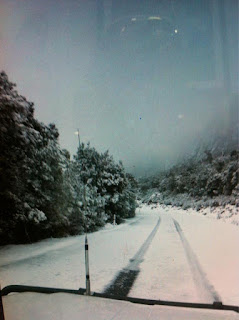 However, all the hype about the climb was turned upside down when on the night before the race, event organisers made a sensible decision to reduce the distance and significantly change the course due to bad weather (mostly snow) on top of the Poatina Climb. Mixed feelings were spread across social media but personally, I was glad to miss the gruelling 15km climb and ensure we would have a safe race. On the morning of race day, we all jumped into the team van and headed to the new start location of Bothwell. The weather was overcast but it was fortunate enough to have the rain stay away for our race. A cross/head wind made conditions that little bit harder and from the start, we grouped together and put the pressure on. It was very important to ride as a team and this is what we tried to achieve during the early stages of the race. After 20km’s a break of 15 riders had established to include Nathan, Jai, Joel, AJ and myself. The group worked well together with the two other major teams of Drapac and Budget represented by 3 riders each. 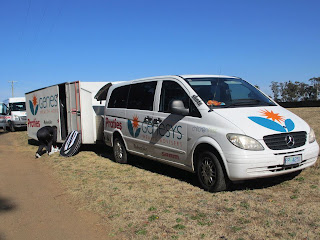 A number of climbs en route to New Norfolk split the break with a handful of riders losing contact. Two small attacks broke clear within the last 20km’s, the first one saw AJ escape with Drapac’s Rhys Pollock but it was brought back by team Budget. The second move consisted of Drapac’s Darren Lapthorn and Nathan Earle. Approaching the finish, Budget tried to close the gap but despite the fast paced efforts of Mark O’Brien the breakaway duo remained clear. 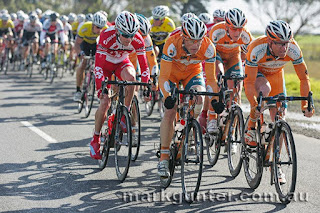 Darren Lapthorne managed to breakaway from Nathan inside the final three kilometres, with Nathan holding on for second place. The sprint for 3rd was won by Jai Crawford after his surge on the short but steep climb with 500m to go opened up a small gap between the rest of us with AJ and I 5th and 6th respectively. Although the team was very disappointed not to take out the win, to have 2 riders on the podium and 5 in the break provides us with some confidence leading into the Tour of Tasmania. Congratulations to Team Drapac’s Darren Lapthorn on a strong ride, we are definitely going to have our work cut out for us in the Tour of Tasmania. To the team of Genesys Wealth Advisors, great ride boys, we will have to go one better in the Tour. Thanks to ACJ for his support, time and effort which he puts into our team to create the success we achieve. To Damo, Nunny and Tim for well-maintained clean bikes, massages and fresh bottles - Thanks for your assistance which makes a massive difference to our performance on the bike. To my shoe sponsor Diadora (www.diadora.com), thank you very much for your support and amazing products! To the team’s sponsors (links on my blog) who assist us in retaining our current No.1 National Road Series Team’s Ranking, we thank you for your wonderful products and financial support you provide, it is very much appreciated. Cheers Brenton.