The small town of Creswick was the host for the 2012 Fred Icke Memorial Handicap which featured 170 riders and a very strong scratch bunch. The weather was near perfect for racing and this definitely supported all riders to eventually complete the 133km handicap race. From the start of the race, the pace was high as we climbed up the most difficult part of the course, a 4km gradual climb. All riders in the scratch bunch were working well and we caught the 3 minute bunch after only 20km’s. With 3 x 44km laps to complete, going up the climb for the 2nd time was a little easier with the tempo being carefully measured to catch bunch after bunch at a steady pace. 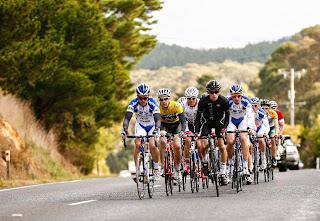 Approaching the 3rd lap, there was only 8 minutes to the leaders and I knew we would get up today. This is when the tactics began to appear amongst a select group of riders. I was riding up the front rolling turns to stay out of the wind and keep in close contact with all the attacks which were starting to develop as we reached the leaders. With 20km’s to go, the lead group was brought back and the attacks intensified. I was still up the front staying clear of the mass group of riders developing behind us as well as helping to create and chase down breakaways off the front. With 15km’s to go, Alex Morgan (VIS) attacked as the bunch briefly eased off and it was one of only a few that was not chased down by the bunch, a big mistake by all riders. Many riders tried to bridge the gap but re-joined the bunch after being unsuccessful on numerous occasions. When everyone is on their max limit trying to hold the wheel in front of you or chase down another attack, it makes it very hard for a bunch to keep a steady tempo. This constant increase and decrease in speed is what helps any rider get away of the front as they are riding at their own fast tempo with no interruption. In the final few kilometres, everyone wanted to be at the front, but it was Alex who would take the glory today in a gutsy ride. I wasn’t in an ideal place for the finish and a strong team lead-out train from the VIS team gave them a 2nd place on the day too. I finished a close 3rd and was content with the day’s efforts. Yet another race where quality experience was gained and many more lessons learnt. 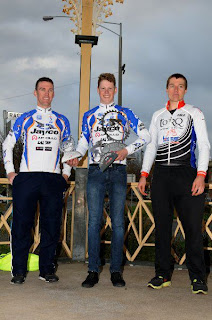 Big thanks to all my sponsors whose support is much appreciated. Thank you to my Parents and Family for the support you continue to provide and to my coach Matt Wallace, we will get a win soon mate! Coming up, a busy schedule appears on the calendar with some top class National Road Series races only a few weeks away. Photo's to come shortly. Hope you enjoyed the read, keep posted for next week’s report, Cheers Brenton