Tour of Toowoomba - a remarkable comeback!

12 months ago, I was in Hospital in an induced coma with a suspected Brain Bleed and Skull Fracture. 4 months off the bike, no driving or exercise plus many visits to the Occupational Therapist, I was back on the bike and determined to re-gain the form I had lost in the hope that one day I would be able to fulfil my dreams and goals I was and still am chasing. I’ve had mixed emotions about the returning to race (obviously), but in the lead up and preparation, I never let those emotions get to me as I tried to forget the past and focus on what I could try to achieve in the future. 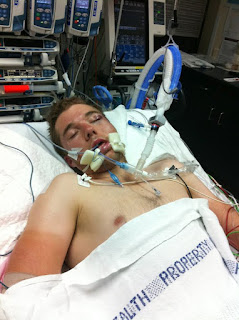 Just 2 days prior to the start, I was on the plane heading for Toowoomba. When we arrived, many memories began to comeback but no nerves were present just yet. In the final day before the start, studying all the stages again and double checking my preparation was complete were the only things on my mind and I really think this helped to take my mind of some other hurdles I was yet to overcome. 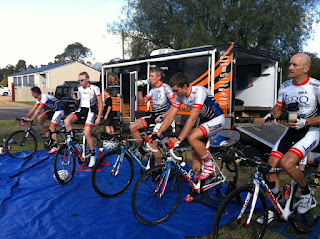 Stage 1, the 2012 Tour of Toowomba was finally here and when I lined up on the start line with my Teammates of the Torq/BSS Road Team, all I wished for was to finish this Tour upright and not in a hospital bed. After the first stage, a 136km race through many back roads and small towns, I finished 13th. A breakaway of 10 riders broke away with 20km to go and I was sprinting for 11th. The Cross winds were challenging at times but I stayed up the front as much as I could, being supported by my teammates, especially Michael Troy and Mark Fenner who made sure I was up the front for the finish. A good day with plenty of room for improvement and many lessons learnt. Stage 2 saw all riders embark upon a 127km journey to the Bunya Mountains where we were happily greeted by a very steep climb for the last 7km’s. The race was controlled by the ‘larger’ teams with all breaks being eventually brought back to the bunch. My fellow teammate Damian Mason was unlucky to have some mechanical issues which left him behind, while Scott Butler and James Rix kept themselves near the front and assisted in supplying us with bottles when we needed them. Tarmac (Micheal Troy) and Fenz (Mark Fenner) and I were also keeping ourselves near the front, out of trouble whilst supporting each other and preparing Tarmac for the final climb. At the finish, Tarmac finished 21st for a strong ride up the climb. I managed to reach the summit, about mid-field and had a laugh of the thought of someone who decided to build such a painful climb. 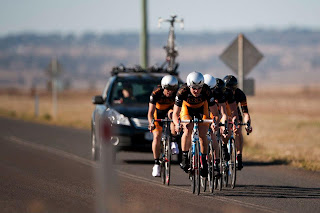 Stage 3 was a 16km Teams Time Trial (TTT) featuring fast open roads with a climb in the middle to add some more pain to the legs. Teams set off at 2 minute intervals and we started well together, working solid turns on the front. When we reached the climb, Damo just dropped off the back, but we continued with 5. At the turn around point, Scott’s legs insisted they were in another place and he left James, Tarmac, Fenz and I to power home together. 4 riders needed to finish and that’s all we had, but it was enough to finish strongly in 10th place (out of 23 teams) with an average speed of 46.5km/hr. 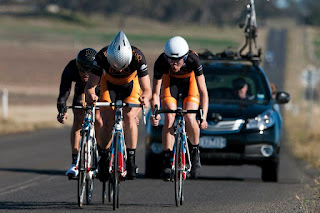 That afternoon was Stage 4, a 120km race from the town of Oakey to Toowoomba’s newly built Criterium Circuit. Last year, I finished the 3rd day in hospital so you could imagine how much I was affected by the thoughts in my mind on the start line. Despite this, I concentrated on the task ahead as we began the race at full speed. Cross winds and open flat roads, I was in heaven and absolutely loving the pain of riding in the gutter fighting for wheels knowing that all the other skinnier riders would be suffering 10 times more like I do on the climbs against them. Our teams plan was to send Tarmac up the road and try to get exposure on the TV cameras whilst getting a few intermediate sprints along the way. The rest of the boys were trying to assist in keeping myself well positioned in the bunch, but there was only so much you could do, every rider had to fight for himself. 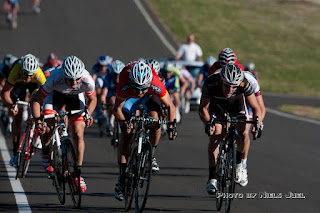 With 20km’s to go, the real tactics were starting to be played with many of the top teams and riders beginning to show some strength. It doesn’t matter who is at the front in the first 100km’s, it’s all about who is at the front in the last 20km’s and this was demonstrated in the final 20km’s today. I thought I was riding safe in the bunch avoiding any dangers until, a rider moved across and into my front wheel taking out half my spokes. I had to stop, wait for the team car and let the mechanic change my front wheel. I didn’t panic, I was just really aggressive in my solo chase back onto the bunch, motor-pacing off other team cars in the convoy at 60-70km/hr. I made it back into the bunch and rode straight to the front with 15km’s to go. Approaching the criterium circuit with 10km’s to go, I tried my luck off the front with 2 other riders but we were caught with 2km’s to go. With 1 lap of the circuit to complete, I just had enough time to catch my breath and prepare for the final sprint to the line. I was feeling confident but we were sprinting for 2nd as 1 rider had escaped up the road with just on 10km’s to go. With 500m to go, I was determined to get a good result and I wanted to come across the line feeling satisfied with my efforts. 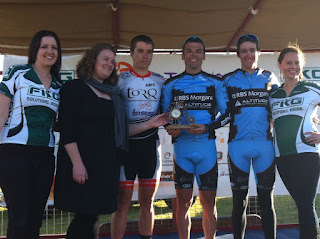 I placed an incredible 3rd and was so pleased with the result! Just think about this, 12 months ago, to the day, I was fighting for my life and now I’m on the podium with Australia’s best? Inspirational was the word many people used to describe my comeback but I was keeping low key (unlike the normal Brenton) just happy to get a result for the team and my sponsors. After all, it was only 2nd loser but it’s provided me with more determination to get that win which I know is so close! The final day saw a 50km criterium race take place around Toowoomba’s Queens Park. It was a fast and furious race with all the sprinters trying to stay near the front. Most riders were feeling the effects of the past 3 days of racing and this made it hard to get support from the rest of the guys but everyone made at least 1 effort to assist me in one way or another which I much appreciated. Young James Rix demonstrated the characteristics of a classy bike rider when he made huge efforts to get me to the front on numerous occasions with 10km’s (4 laps) to go. In the final sprint for the line, I was over-powered by the sprinters from larger teams who all had 3 or more riders supporting them in the final 2 laps. I managed to finish 7th which was a good result considering there was quality field of 140 riders all charging around the course at a furious speed. 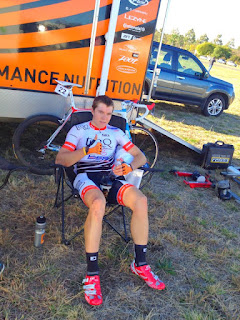 Well, I had made it! I finished the Tour of Toowoomba on a bike this time, to the relief of my parents and family. A podium place on stage 4, a top 10 in stage 5 was enough to convince me I had achieved a lot over the past 12 months. I’m very pleased with my current form and I will keep working harder to achieve that much deserved win I am looking for. Big thanks to my family who came to witness the race and support out team, we couldn’t have done it without you. To my teammates, thanks boys, you all contributed to the little success we created and I hope we can achieve bigger and better things in the near future. Thanks to Dean at Torq Australia and all our other sponsors for your support which we could not be without. 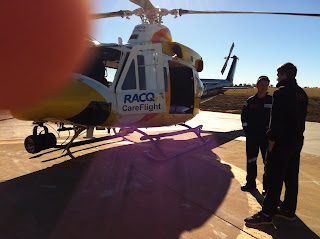 Before we left Toowoomba, my family and I made a visit to CareFlight, a medical service which supports Toowoomba and surrounding areas. I got to meet the pilot and paramedic who attended my accident last year, with both of them strongly remembering that day. It was great to meet them and they were very appreciated to see me come and thank them. Keep posted on my next blog, I’m currently on my way down to NSW with the team to compete in the Tour of the North West which starts on Thursday. Wish me luck! Cheers Brenton