The 2012 Santos North West Tour took place in the heart of New South Wales with the courses featuring a mix of hills, flats and fast street circuit racing. After travelling down from the Tour of Toowoomba, the Torq/BSS Team and I set up camp for Day 1’s stage which was located in Narrabri. Because we arrived well in advanced of race start, we took the opportunity to explore some of the courses that we would be undertaking in the next few days. It was the perfect chance to get yourself in the right frame of mind and to know what you would be expecting on race day. Before we knew it, Stage 1 was upon us and we were on our bikes preparing for the 3.7km Individual Prologue – a race against the clock which provided no place to hide because, you’re on your own! For some reason, I was a lot more relaxed than I usually am before any race start, taking any opportunity I could to have a laugh with teammates or my competition. From listening to music on the iPod and dancing to tunes in our Torq Team Caravan, it was like I totally forgot I was here to race, but it turned out to be a successful preparation and something I’ll look to adapt in the future more often. After a good warm up including a mix of riding on the rollers and out on the road, I was all set for my race start. Riders set off at 30 second intervals and with a head wind on the final back straight, I decided not to go out too hard and conserve energy I would need for the final half of the race. Despite the short distance (3.7km), it’s an incredibly strenuous race to perfect and I was thankful that my decision to pace myself actually paid off. With 140 riders entered in the Tour, I was very pleased to find out that I had placed a respectable 3rd place and record my second National Road Series Podium for the year. Stage 2 saw a 60 minute Criterium take place only a couple of hours after Stage 1 which meant food, hydration and recovery had to be your number 1 friend following the completion of the prologue. Lining up on the start line, I had the chance to wear the leading Young Riders Jersey, but only by default. The winner of this morning’s Prologue, Jordan Kerby was an U23 rider (young rider) and due to the first stage being completed by a prologue, he had the lead in the General, Young Rider and Sprint Classification’s. Because I was 2nd placed in the young rider’s classification, I was given the Jersey to wear for Stage 2’s criterium race. From the start, attacks were a constant affair with many of the Tour favourites keeping out of trouble riding near the front of the bunch, the safest place to be! With a handful of intermediate sprint points on offer, I aimed to contest the ones I could and with the help of my teammate Michael Troy, I was able to pick up points in 3 out of the 4 of the sprints on offer. My position was good and my legs were even better, but at the 35 minute mark, I got a front wheel flat forcing me to take a lap out and re-join the bunch again. The racing was fast and furious and at the 45 minute mark, a crash on the front straight left a handful of riders down. Almost immediately following the crash, a 2nd incident occurred on the back straight with riders colliding with a motorbike that was too close to the racing line. Officials decided to neutralise the race which meant all riders who were positioned at the front (me included), got shuffled back through the bunch as almost every other rider took the opportunity to force themselves to the front during this neutralised period. When racing returned (with only 3 laps to go) I was looking for teammates to get me to the front. My brother Jarryd tried to help me out on the final lap but he had nothing left and I was forced to fight it out alone. In the end, I finished 11th and I was a bit annoyed with how the race had unfolded. 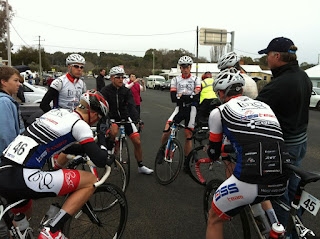 Stage 3 saw the first and only ‘hill climbers’ stage take place with wet conditions adding to the difficulties ahead of us. With a very steep climb being undertaken early on into the race (at the 19km mark), all riders appeared to stretch out their legs in preparation for the final climb of the day. A mix of flat and rolling roads were then commenced with riders from various teams controlling the tempo at the front. Approaching the final 10km climb, attacks started with a break of 10-15 riders escaping before the bottom. I didn’t quite manage to make the break and when we hit the opening steep section of the climb, I found the pace a bit too high for me. Although I lost contact with the remaining 35 riders, I held a strong tempo to the top to finish in the top 1/3 of the field. Stage 4 began at the top of Stage 3’s climb with riders descending down to the bottom where the ‘official race start’ was given. Only 20km’s into the race, I got another flat for the Tour and was immediately changed by the Budget Team Car (which was supporting our team as well). After a motor-pace back to the bunch, the heart rate was up high and I found myself at the rear of the field. My teammate and brother Jarryd Jones helped take me to the front ¼ of the field, but by the time we got ourselves positioned in a good spot, the main breakaway was already being established up the road. Before I could catch my breath and realise what was happening, the break was gone and the race was over. The remaining 100km’s was straight down the highway, which was such a thrilling race, not! Across the finish line, I was very disappointed with my misfortune and my decision to not attack across to the break. I hope to have learnt from my mistakes in future races to come. Stage 5, the final stage of the Tour departed from Gunnedah on a 125km longer route to Tamworth. It was only 15km’s into the race when we encounter our first obstacle, a railway crossing! The field was stopped and the race was restarted shortly after the train had passed. Whilst we were stopped, the race officials warned us all to keep to the left hand side of the highway (due to not having a rolling road closure), but with cross winds and 140 riders, this was never going to work! By the time we got back up to speed, we were once again stopped and pulled over! Organisers then told us that the race was over and the stage would be cancelled, but shortly after we were told this, managers and organisers compromised by selecting 1 rider from each team to undertake what would be classed as, the final race. Everyone was complaining about the situation as it was a disappointing end to the Tour. Despite this, I was selected and set off with the remaining riders to complete the race. Approaching the finish, there was no ‘km to go’ signs which left us all curious as to where the finish would be. In the end, 3 riders managed to escape and they finished only 30 seconds ahead of us, but if we had known how many km’s left to race, I’m sure the outcome may have been different. I finished the bizarre stage in 6th place and was once again annoyed at organisers for the appalling race conditions we were all exposed too. On the plane back home, I was pleased to come away from the Tour with another National Road Series podium! A much deserved recovery awaits me before I gear up for some local state races in the coming weeks. I would like to thank my parents for their incredible support throughout the Tour, my sponsors Torq Nutrition, Monza Imports and SRAM for the support provided to the Team and my coach Matt Wallace who keeps me on track. Stay tuned for my next race report, I hope it’s a successful one. Cheers Brenton