Since 1964, the Gippsland 3 day tour has attracted many talented riders, most of whom have represented Australia in various years and achieved outstanding results on both the national and international stage. The 3 day, 4 stage Tour provides the all-round rider the best of chances to succeed with 3 road stages and 1 Time Trial makes racing close, yet fast and furious. After having triumphed in the past two years, I was hoping to get yet another win to make it 3 years in a row, the first in the races 50 year history! On the start line, my biggest competition was going to be Stuart Smith, who rides for the Victorian Institute of Sport (VIS). My brother Jarryd Jones was also riding well and has been rapidly improving and Sam Beveridge would also be one to watch in defending my title this year. Stage 1, saw a 90km road race consisting of short sharp climbs and flat open roads encourage riders to breakaway and get an advantage early on. With this in mind, it was only 8km’s into the race before Stuart Smith and myself attacked over the K.O.M (King of the Mountain) and road away from the rest of the field. For the next 80km’s it was like a training ride with both of us sharing the work load on the front whilst casually having numerous conversations. In the end, it came down to a sprint and I was happy to take the win and finish with a 10 second lead (including time bonuses) over Stu after the first day of racing. 7 minutes later, the bunch came across the line with Danny Gafa just edging out Jarryd in the sprint to the line. Day 2 consisted of stages 2 & 3, a 9km Time Trial in the morning and an 85km Road Race in the afternoon. After a good warm up, the Heart rate and the legs were ready to go! With Stu only 10 seconds behind me on the overall GC, I knew I had to post a very fast time to stay on top and keep my lead. My legs were feeling heavy throughout the race and I thought it would be a slow time but when I checked the results, I posted 11’02 minutes, 10 seconds faster than last year and averaging 46.6km/hr. It was also enough to take the stage win and keep the overall lead after Stuart rode a very respectable 11’29 and Jarryd on his road bike with clip on bars rode 11’53. 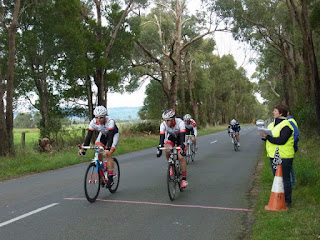 After some much needed food and recovery, stage 3 was underway only a couple of hours later. The 17km course which features a 1.8km gradual climb made racing furious with many attacks being instigated on every lap. Despite the attacks, it wasn’t until lap 4 of 5 that a small selection of riders including Stuart, Jarryd, Sam and myself managed to open up a gap and ride away from the rest of the field. We were working reasonably well together until Stuart held a steady tempo up the climb on the last lap, offloading Sam and another rider reducing the lead group to just 3. With Stuart out-numbered, it was up to Jarryd and myself to do the pace making and do our best to beat Stu. With 10km’s to go, Jarryd and I began to ‘1-2’ Stuart, attacking him again and again. After Jarryd had tried to get away, it was my turn to launch an attack and hope to breakaway. Thankfully, I was successful leaving Stuart to chase and Jarryd to rest his legs on the back ensuring I would stay away. Across the line, I was able to take another stage win and put more valuable time into Stu on the overall General Classification (GC) whilst Jarryd rode away from Stu in the last kilometre to claim 2nd on the stage – a strong ride! 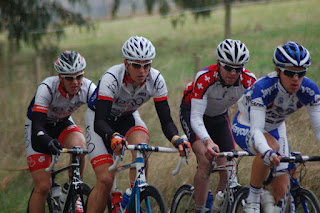 The final day saw another 90km Road Race conclude the 2012 3 Day Tour, but conditions were relatively cold with fog ensuring the first half of the race would be spent in a maximum of 5-6 degrees. From the beginning, it looked like it was going to be a long day in the saddle with only a select number of riders contributing to the pace making, most likely because Stuart and myself both held an incredible 7 minute advantage over the rest of the field. Jarryd was holding onto 3rd place on the overall GC with Sam a minute or so back in 4th. On the last lap, Sam attacked and broke away solo to try and put time into Jarryd. The attacks intensified the last 10km’s with a handful of riders trying their luck to break away and win the stage. With Sam back in the bunch, everyone had a chance, but in the end, a final sprint showdown between local fast man Danny Gafa and myself would be the decider on the day. Both Danny and I started to sprint from 300m to go and produced a finish so close, that the officials called it a draw. I’m positive I had the edge but the final call was made and a draw was the result of stage 4. 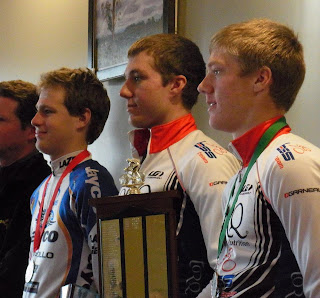 3 straight wins!!! 2010, 2011 and 2012 which has now put myself on the trophy and into history as the only person to have won 3 consecutive Gippsland 3 Day Tours – an achievement which I’m very honoured to have. With the pressure off the shoulders to win the title 3 times straight, my focus now turns on the next couple of weeks of racing where I aim to place very well on the National Stage. The Tour of Toowoomba, a race with many mixed emotions and only a small selection of memories will be my next race on the calendar, so stay tuned for the race report and photo’s, hopefully this time I can finish the race upright. Thanks Brenton