A cold but fine morning in Harcourt greeted riders prior to the start of the Victorian Country Road Championships. A tough 112km road course provided a mix of rolling hills and fast flats with short but steep climbs providing all riders with a chance at victory. 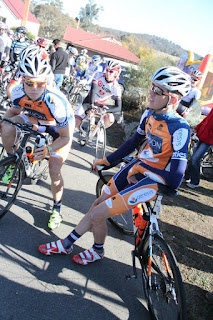 On the start line, there were a number of notable riders from various national road series teams, but we were also representing our country clubs, fighting to take home the state title. During the warm up, I felt motivated and my legs were good. To add to any pre-race pressure, I was wearing number 1, I needed a good result and when we raced this exact same course in the 2011 state champs, I won – so, no pressure at all, right? When racing started, a few small attacks looked dangerous but it wasn’t until the 20km mark that a group of 6-8 riders formed out in front after surging clear of the main bunch through numerous 1-2 man attacks. With my Huon – Genesys teammate Pat Shaw in the break, I was taking a back seat covering moves and waiting for the ‘fireworks’ to start once we reached the toughest section of the course – a steep but short climb named the ‘Turd-burg’. 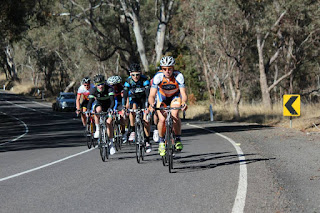 A few riders kept the main group moving and this reduced the gap to the leaders before the decisive climb. The break had 40seconds when we hit the bottom and without hesitation, the pace was lifted by Budget Forklifts Shaun McCarthy, then followed Charter Mason’s Sam Crome and I was sitting comfortably in third. The pace was too much for some and by the time we got halfway up the climb, we were down to 6 riders. 200m to the top and Sam Crome surged hard and I was the only one to follow. We joined the breakaway just as we crested the climb and soon after, began swapping off to continue the pace making. 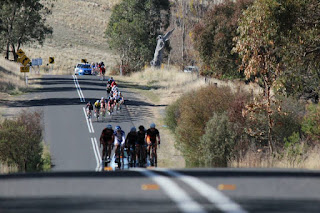 With 1 lap down and 1 lap to go, the main bunch (or what was left of it) was gaining ground on us and they soon re-gained contact with our lead group of 8-10 riders making the front bunch a total of 20-25 riders. Attacks dominated the middle part of the race with many more small moves trying to go clear. I tried to up the tempo on one of the climbs but was brought back soon after and for me, it seemed that my number 1 way like a magnet to everyone else. A couple of 1 & 2 rider attack once again broke clear in a 6man break which was led by my teammate Pat Shaw who was riding well to make yet another break. Both Charter Mason riders Matt Clark and Sam Crome missed the move and along with 1-2 other riders, they held a solid tempo to bring the break back. With 30km’s to go, the lead group had an advantage of 1min 40seconds, but the sharp hills scattered throughout the course provided the perfect opportunity for our chasing bunch to splinter to bits. Matt Clark lifted the tempo on the challenging hills before we reached the locally known ‘Turd Burger’ climb were the race winning move was made. 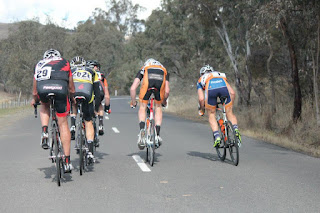 The second group on the road consisted of Shaun McCarthy, Sam Crome, Jason Lowndes (Torq), Stephan Fairless, Matt Clark and I, trailing the lead group by 40 seconds. A few small attacks tested the legs before Clark made his move and went solo to bridge the gap. I crossed the gap soon after but Matt and I were soon reeled back in by the four chasers. Matt surged again towards the base of the climb and I was the only one to follow him. I knew I had to get across to the break and with the leaders in reaching distance, I took the last turn to close the gap and place Matt and I in the front group, only 15km’s after we trailed them by 1min 40. Over the climb, only the strongest were left with Pat Shaw and I representing Huon-Genesys, VIS rider Tom Hamilton, Charter Mason’s Matt Clark and well-known cycling hard-man Trent Stevenson making up the lead group with only 12km’s left to race. 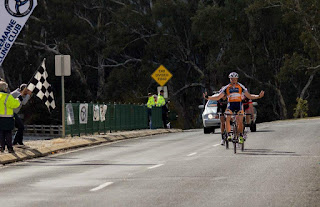 8km’s to go; Matt Clark attacked and tried to shake us off his wheel with only Trent and I being able to follow him. 5km’s to go; it was just the three of us watching each other playing cat & mouse all the way to the line. Matt attacked numerous times but I covered all of them. Both Trent and Matt knew I was the fastest sprinter and didn’t want to take me to the line with them. 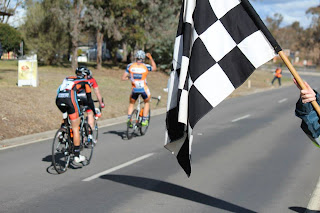 Approaching the finish, we were all still together. Matt kicked first and I slowly followed, waited for Trent to go and timed my run to perfection taking the State Title, repeating my victory in 2011. It was a hard race and I had earned every bit of it, a true representation of the hard work I have done throughout my training and it goes to show that it pays off! I’m now preparing to travel over to Adelaide where I’ll join my Huon Salmon – Genesys Wealth Advisors Cycling teammates for the National Road Series Tour of Adelaide. It will be my first NRS race this year so I hope I can kick start my NRS season off on a good note with the team. 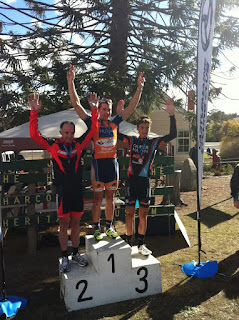 I’d like to say a big thanks to our sponsors; Huon Salmon, Genesys Wealth Advisors, Praties, Champion System, Avanti, SRAM, Torq Nutrition, Zipp, Giro, Addidas, Perth Intergrated Health, Aussie Butt Cream and Rock Tape for their continued support. Thanks also to Diadora Australia for their support with cycling shoes and clothing (worn by Cadel Evans & Simon Clarke), your products are simply awesome! To my coach Matt Wallace, my whole family, friends and girlfriend Lucy, thank you very much for your encouragement and backing throughout my busy training schedule. Keep posted for the team’s Tour of Adelaide performances; I look forward to the upcoming races on the calendar and I’m excited to learn from the experience’s I will gain from them. Thanks Brenton