Skip to main content
May 29, 2013
Bags packed, bikes in box and yet another early start – just your standard travel day as a cyclist of the Huon Salmon – Genesys Wealth Advisors Pro Cycling Team, destination this time, Adelaide, SA. Meeting up with my fellow Victorian Teammates Jack Haig (current NRS Leader) & Pat Shaw (Team Captain) at the airport, we enjoyed a Qantas Club Breakfast before boarding our plane. 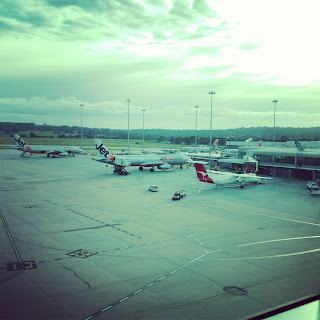 Upon arrival, Jack, Pat and I spent an hour in the café waiting for Jack Beckinsale & Aaron Donnelly to arrive before we were all collected by our Team Soiguer Neil Walker and transported to our accommodation for the week. After building our bikes, we rode the course which would be used for Friday’s stage 1 TTT and spent the rest of the afternoon unwinding at the accommodation. It’s always nice to roll out the legs after a day of travel, plus it’s a good time to catch up with your teammates who live and train in different places around the country. 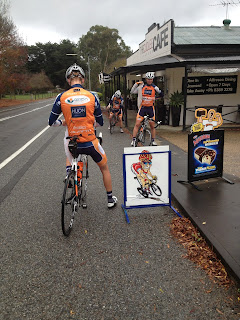 The day before stage 1, was not a good day for me. I woke up feeling a little sick and lost my appetite. Despite this, I still participated in the team’s training ride, hoping that I would come good. It wasn’t until the end of the ride when the boys sat down at the Café to eat lunch and I was in the bathroom throwing up my breakfast. It wasn’t fun and I wasn’t happy, especially the day before stage 1. Feeling sick for the rest of the afternoon and throwing up once more, I finally kept down my dinner and was hoping I’d be feeling better in the morning. 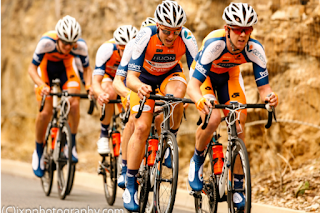 The morning of stage 1 was here and thankfully I was feeling good. Not 100% but feeling much better than yesterday. Our team captain Pat Shaw had been struggling with illness and wasn’t feeling good on the morning of stage 1, he didn’t start the race, flying back home to be with his family in the afternoon. Down to 7 riders, we all encouraged each other throughout the race and gave it our all. The 20km course was 80% flat/downhill with a few short but challenging climbs testing the legs of all teams. We set a fast tempo, led by our strongest TT riders Jack Haig & Aaron Donnelly.Approaching the finish, our time was good but not good enough, finishing in 3rd place in a time of 25 minutes, an average speed of 50km’s/hr. Although it was not the result we wanted, it was not disgraceful. Our heads were kept high and we all focused our attention onto Stage 2’s 158km Road Race. 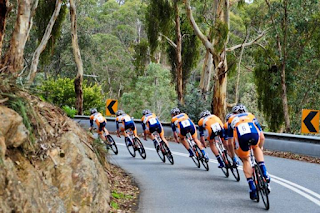 Before the start of the road race, we were quite relaxed due to an unusual late start time of 1:30pm. Not knowing what tactics to expect from the other teams, we were told to keep a watchful eye on the main contenders but at the same time, take a back seat for the first of three 52.7km laps. Team Budget were keen to disrupt the current overall leaders (Team Euride) in the early stages of the race but they showed composer to control the attacks and the pace-making. A number of breaks went clear and we were present in them all. The course featured tough rolling hills, fast flats and 2 dirt road sections to add a little change to our normal race circuits. With the support of our staff, we were able to take on some Torq nutrition products during the race, keeping our bodies fuelled throughout the fatiguing stage. Although the hills were hard and split the field, our Avanti Road Bikes with SRAM components and ZIPP wheels guided us through the hills which for me, feels like I'm cheating riding a bike that fast! The bunch remained together by the start of the final lap with no breakaway being able to stay clear. 30km’s to go, our team was all near the front and Jack Haig was looking to pounce on the steep climbs 15km’s from the finish. Approaching the climbs, Team Euride were still in control but the attacks soon begun with numerous surges creating small gaps throughout the bunch. A select group of around 8 riders went clear containing Jack and although only 30 seconds up the road, it would be enough to stay away going over the dirt sections approaching 5km’s to go. 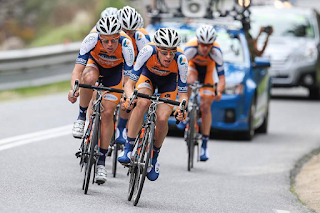 Sam Davis, Aaron Donnelly, Tom Robinson and I were positioned well in what was left of the front group which had reduced from 105 to 35 riders. Making it over the short but steep dirt road climbs, we were trying to preserve our Team’s GC position in 3rd which is recorded by the team’s first 3 riders to cross the line each stage. Near the end of the dirt section with only 5km’s to go, Jack got a rear flat and had to wait for a spare wheel, however Sam was first on the scene to give him a wheel and along with the team car, put him back in the bunch with only 1km to go! At the finish line, 3 riders stayed clear and the bunch was sprinting for 4th. It was a dangerous sprint with a nasty crash at 800m to go whilst travelling 55-60km’s/hr. I was up there but preferably wanted to finish the stage with all my skin still intact so I rolled in with the group and my teammates Jack, Aaron & Tom, in the front group of about 30 riders. It wasn’t the result we wanted but some bad luck for Jack in the last 5km’s ruined our chances of a win. Thankfully, everyone made it through the stage in one piece, turning our concentration on recovering for the final stage the following day. 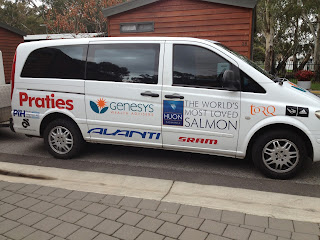 The final day saw 22 laps of a 3.7km street circuit take place with Team Euride once again controlling the pace and showing their dominance. The plan for the day was to get Jack Beckinsale into a break but if it came back for a bunch sprint, the boys would try and lead me out for the finish. It was a fast circuit with an uphill sprint and a very open road with 1km to go. Nothing was getting away despite the tireless efforts from Budget forklifts. Aaron and Jack tried to get away but in the end, a bunch sprint was certain. It’s a great feeling being placed behind your teammates who are sacrificing themselves for another rider and that’s something Huon – Genesys does so well, teamwork! The boys took up the pace with 2 laps to go but were challenged by the lead-out trains of other teams. With the pace being so high and the finish so wide, it was easy to get swamped and boxed in. At times, our 5 man lead-out was pushed back into the bunch but the boys tried to hold their ground at the front as best they could. 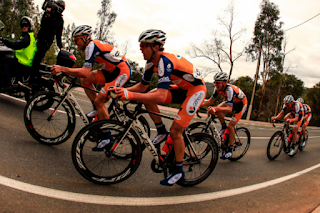 Approaching the finish, no single team had control with at least 20-30 riders fighting it out at the head of the bunch. I was too far back, despite Jack Haig trying to move me up to the front with 800m to go, but it was messy. Crazy man Jack Beckinsale found the right wheel however and placed 3rd across the line to step onto the podium for the boys whilst I rolled in for 6th. An end to the 4th NRS Tour for the year, we finished 3rd on Teams GC, 3rd in stage 1 TTT & 3rd with Jack on the final stage. I finished 9th on GC and Jack Haig was 10th, picking up 1 point towards his current NRS Individual Series Lead. With some great success from the boys in Japan, they return to Australia to join us for the next NRS race for the year in NSW. Following that, I join 5 other teammates and head to Malaysia to race a 5 day Tour over there. It will be an exciting month ahead for our team and we hope to continue the fantastic start to the year. Big thank you to Diadora Australia for your support with Shoes and to all of the Team's sponsors who support and help us to retain our number 1 National Ranking. To my coach Matt Wallace, Mum & Dad, brother & family girlfriend Lucy, I appreciate your continued support to chase my dreams. Keep posted for my next blog report and enjoy your riding. Thanks, Brenton.