The Tour of the Great South Coast began in the town of Portland, a short 4.5hr drive south west of Melbourne. It was my first Tour with the Genesys Wealth Advisors Pro Cycling team after I recently moved from the Torq/Bicycle Superstore Road Team. I was very nervous the night before stage 1 and had a bad sleep being unsure of what was going to unfold and not wanting to disappoint my new teammates, sponsors or supporters. The whole team were very supportive and I was keen to help them out in achieving some great results during the Tour. 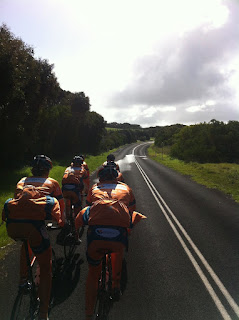 With wet roads and a little bit of intermittent rain conditions for the stage 1 criterium were tricky but the team was ready to go despite the conditions! Regardless of a few crashes, we came out on top and with 5 laps to go, the boys got together and we were in near perfect formation, absolutely smashing it on the front. In final lap young Campbell ‘Flakey’ Flakemore pull a huge 60km/hr turn to launch Pat and myself into the ideal position with AJ close behind. With 500m to go Pat gave me the ‘flick of the elbow’ and I was the final lead-out man for AJ. 200m to go, there was a sharp hairpin corner, I looked back and couldn’t see AJ, so I put my head down and just went for it. As I crossed the finish I knew I had won my first ever National Road Series Stage Victory with AJ smashing it home for 2nd to make it a 1-2 on the podium for the teams. It was a fantastic start for the team and goes to show that Teamwork Wins Races. AJ lead the GC and Sprint Jersey and I held the Criterium Jersey after stage 1. 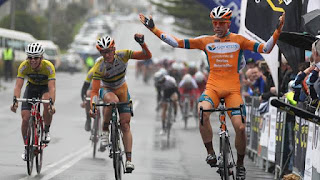 The Road stage in the afternoon was very windy with open roads and rolling hills to make it difficult, bunch position was important and the team worked well to keep AJ out of the wind. Ensuring we had someone in the breakaway was another important team tactic for the day, but no-one managed to escape and it came down to a bunch sprint. There was a big crash with 3km’s to go which unfortunately happened two wheels in front of me sending me over the bars. AJ, Pat, Campbell and Jono narrowly avoided the carnage and were left with a bunch of 15 riders. When I rolled back to the Team, I was delighted to hear that AJ had finished up 4th and retained his overall GC lead, a credit to the rest of the boys still up there at the finish. After a good feed, clean bikes and a team meeting, we were ready to take on the competition on Day 2. 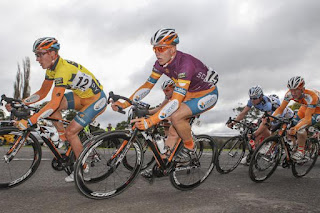 A wet race looked imminent when we woke up in the morning but all riders were relieved on the start line as the weather just held off for Stage 3’s crit race. Once again our team plan was to try and protect AJ who was leading GC and win a few intermediate sprints which we did on numerous occasions. The race was controlled by the larger teams with a few small breaks only lasting a few laps. Approaching the final few laps it was the same strategy as yesterday’s crit, get to the front and ensure we were in our lead-out formation. Jai, Jono and Sam opened up their horsepower with 4 laps to go, placing Flakey, Pat and I in the perfect position to set up AJ for the win. 1 lap to go, Flakey was at his best and was drilling it on the front as he set up Pat who gave us the perfect lead-out. When we rounded the last corner with 200m to go, I kicked off Pat’s wheel and I knew AJ and myself would make it another 1-2 on the podium for the team. Over the line, the podium replicated that of stage 1 with myself and AJ in 1st and 2nd and Ryan MacAnally (Budget Forklifts) in 3rd. There is no better feeling than coming across the line in 1st & 2nd because when your teammates turn themselves inside out with 4 laps to go to keep you at the front, you know you’ve re-payed them for their efforts. AJ retained his overall GC lead, Pat held the Sprint Jersey and I held the Criterium Jersey with the team once again stamping our authority in the crits. 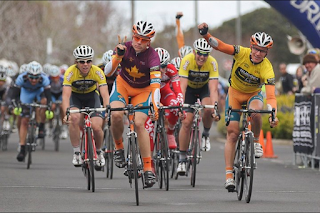 The afternoon’s road stage saw wet weather and strong winds control racing conditions once again with tough climbs sorting out the field. We had a couple in the break at times and did our best to control the front when we could, but the climbs were open and this reduced the size of the field dramatically. The final 15km’s saw a select bunch of riders breakaway and we were represented with Jai Crawford. With 5km’s to go, Darren Lapthorne attacked the lead group to take the win and lead of the GC to AJ by 11 seconds. Jai managed to ride strongly and finish in 5th but we were unhappy with today’s overall performance having lost the GC. 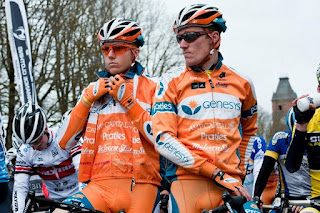 Strong winds and heavy rain greeted all riders on Day 3 and with no warm up and a fast start, I wasn’t prepared for what we were about to endure. Persistent attacks kept the pace high and on the tough 2.5km course, there was little time for recovery. The boys rode the front and kept tempo to chase down any attacks, but AJ and I weren’t feeling our best. We both missed valuable opportunities to gain bonus time in the intermediate sprints which were our team instructions. With 7 laps to go two riders escaped and stayed away to the end with the field being split to pieces by the fast pace which created many small gaps throughout the main bunch. Not taking part in any Intermediate Sprints was a massive negative, the only positives were that I maintained the Criterium leaders Jersey and AJ was still in contention for GC not losing any time to Darren Lapthorne. The afternoon’s Road Stage was cancelled due to extreme weather and we were all relieved to have the afternoon off and rest the legs in-between the demanding racing. 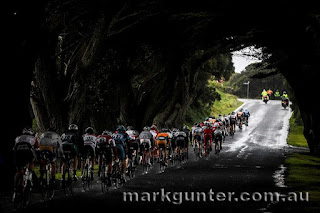 Most riders were tired on Day 4 and when we lined up together on the front for the crit, I was hoping we would have another good race. The team were riding at the front as much as we could because it is always the best and safest place to be. Our roles were to follow the main contenders who were threatening AJ for overall GC and assist in the lead-out’s for intermediate sprints to get time bonuses for AJ. My legs struggled with recovery today and the repeated sprint efforts were not helping, but it’s a team effort though and I was lucky to have stronger teammates today to assist AJ when I couldn’t fulfil the role. Coming into the finish the Team was riding strong at the front to make sure that AJ was placed in the right position but the Budget lead-out train was also fighting for the place to be in Stage 5. Around the final corner AJ somehow muscled his way through the front to sprint to the line in 1st place, an outstanding ride (even after contesting an incredible 11/15 intermediate sprints). His performance secured him the Yellow Jersey to lead the GC again but the race wasn’t over yet and we had a lot of work to do that afternoon. 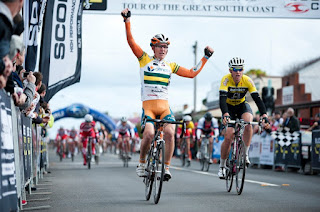 The afternoon’s road stage was heavily affected by the wind with the open roads providing little shelter. The best place to be was at the front and I tried to stay there as much as I could. Our plan was to keep AJ safe in the bunch and chase down any potential threats to on GC. The boys rode the front as much as they could to split the field in the wind and limit the chances of a breakaway being formed. During the race, everyone helped out in one way or another, wether that be keeping your teammate out of the wind or doing the pace making at the front, it all makes a difference in the end. Approaching the finish we tried to keep AJ near the front but unfortunately we were unable to control the final lead-out. I was taken out by another rider on the last corner but AJ still found the right wheel thanks to some good positioning from Pat. He ran 4th which was a good result and still held the overall GC lead by only 6 seconds to Paul Van Der Ploeg (Search 2 Retain). 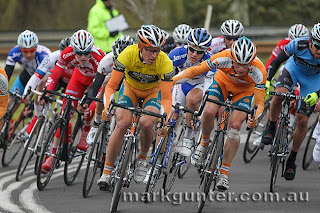 The last day of the Tour and we were determined to keep AJ in the overall GC Lead! From the start the pace was on with the attacks resulting in a breakaway of 3 riders who stayed away for the first 4 out of the 6 laps on the 15km circuit around Camperdown. Joel worked hard at the front making sure he was in a good position to chase down any attacks and made the job easy for the rest of the team. The rain was off and on but not as bad as previous days, everyone was tired and I personally was feeling sore from my crash the previous day but when you’re supported by strong teammates who assist you home on the final lap (thanks Jono, Sam and Joel), it makes the ride a lot easier. Up front on the final lap, Flakey, Pat and Jai did an exceptional job to sacrifice themselves up the final climb and support AJ right to the end with Flakey putting the icing on the cake to take out the final stage. AJ won the Tour and due to the amazing efforts by the boys today, we won Teams GC too! We also finished with 4 stage victories and I was pleased to wear the Criterium Leaders Jersey to complete a perfect Tour for the team. 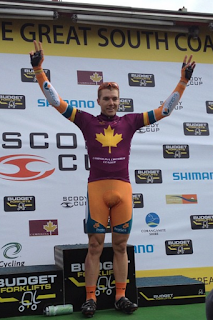 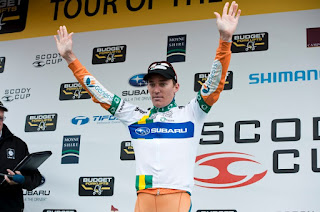 We also extended our lead in the NRS Teams Classification. 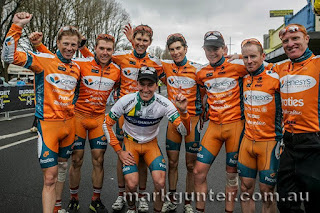 It was a great way for me to start with the Genesys Wealth Advisors Pro Cycling Team and I’m really looking forward to continuing our success as a team in races to come. I’d like to thank Andrew Christie-Johnson and Neil Walker for their efforts behind the scenes, also to Damo for keeping our bikes in perfect condition and Nunny for the Massage’s. To our sponsors, I look forward to representing your products at the highest level and I thank you for supporting the team. Also, thanks to Mark Gunter (www.markgunter.com.au) for the awesome photo's on display! The next race on the calendar is the Tour of Murray and we look to continue our success in what will be the longest National Road Series Tour of the year. On the 19th of October, I’ll be taking part in a 270km charity bike ride to raise money for CareFlight, a not-for-profit lifesaving service who saved my life in Toowoomba 2011. I’d really appreciate it if you supported me; just follow the link below to see what it’s all about. You never know when someone close to you may need to use a service like CareFlight, so please support. http://www.everydayhero.com.au/brenton__jones Stay tuned for the next race report, Cheers Brenton