The 2012 Lakes Oil Tour of Gippsland, one of four major NRS Events of the year, began in the picturesque area of San Remo. A record field of 168 riders representing various teams across Australia took part in the annual event in what was a very intense 5 days of racing. 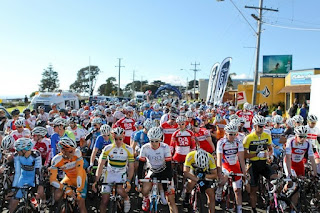 Day 1 saw a morning criterium in San Remo followed by an afternoon road race around the famous Phillip Island Grand Prix race track. My teammates from the Torq/Bicycle Superstore Team rode well to help Robbie and I when they could. Robbie was involved in a crash with 4 laps to go but came away with only minor injuries whilst I kept near the front to finish in 8th. After some Torq recovery and some food, we set off as a team to the Grand Prix track. It’s a fast course on a closed circuit which seems quiet suitable for a bunch of 168 riders to race on, but strong winds and aggressive racing provided all riders with a very tough time in the saddle. At times, the bunch was strung out into one long line with the pressure being applied on the front by the larger teams. I managed to keep as close to the front as possible and avoid any crashes, finishing in 5th place which was a good result. 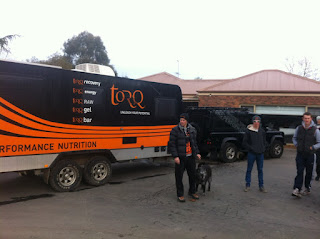 With the Tour being so close to our home, I was able to have some much needed sleep in a familiar environment and was ready to race on Day 2. Before racing, it’s always important to have an adequate warm up to prepare (warm up) the body for the pain it will shortly endure. My warm up varies from time-to-time but, a short spin on the bike, a solid tempo effort on the rollers, visit to the toilet and a lap or two of the race circuit usually completes a typical warm up for me. I tried to simulate this before stage 3’s criterium race which took place on a tough circuit around the Moe South Primary School. In the beginning of the race, the pace was fast and maintaining a good position at the front wasn’t easy. I managed to finish in 11th place and immediately turn all my focus onto the afternoon’s challenging road race from Morwell – Yinnar which took riders through the hills of Thorpdale. After previously riding this stage during training with my brother and teammate Jarryd a few weeks before, I knew what to expect and where best to place myself in the bunch at different times during the race. Undulating terrain split the field to pieces with only 40-50 riders in the lead bunch at the finish. I was happy with how I was climbing and my legs were feeling good approaching the final few kilometres. In the very chaotic run to the finish line, I managed to find the perfect wheel which was AJ from Genesys and with 200m to go I knew I was going to make the podium. When I kicked out of AJ’s slipstream and lunged for the line, I felt confident that I was in the lead, but when I looked across, Luke Davison from Budget Forklifts was still hanging on and just got the win in a very close photo finish. 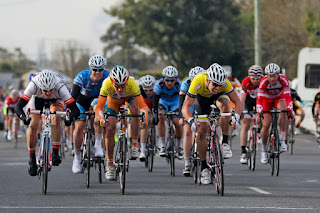 I was happy with my ride and the thought of finish in 2nd on a tough stage with a quality National Level field of 168 riders was very pleasing to say the least. 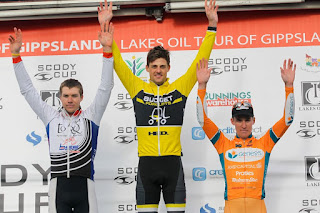 Day 3 saw the Tour embark on a new area of Gippsland with a criterium in Sale to start the day off. The 1.2km street circuit made for great racing amongst all riders with the spectators, mostly school children, thoroughly enjoying the fast and furious racing on display. My legs were feeling great and my teammate Brendan Shultz helped me to get some points in one of the intermediate sprints which were hotly contested. Despite trying to find the best position in the bunch for the finish, I got swamped and finished in 9th, another top 10 result but not my best performance. After some food and drink to replace the energy levels, we were on our way to Maffra, the location of the Road Race which was only 2hrs after the Sale criterium had finished. The 101km Maffra to Dargo Stage consisted of rolling roads and challenging climbs through the Mitchell River National Park. From the start, the pace was on and I was fortunate enough to have my teammate Michael Troy keep me out of the wind as best as possible in the early stages of the race. When we approached the major climbs of the stage, my legs were good and I was able to climb with the leaders with Michael, Robbie and myself maintaining good position in the bunch. In the final few kilometres, a handful of riders tried to escape the lead bunch of 50 riders but were unable to succeed as the lead-out men from various teams kept the pace high. I was unable to find a clean run to the line but still managed to find my way through the fast moving sprinters for 3rd. I was pleased to record another strong NRS podium result in what was the toughest stage of this year’s Tour of Gippsland. 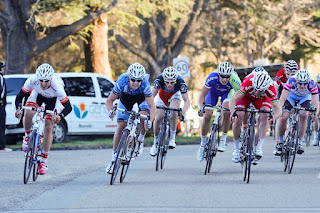 The first of the rain clouds appeared on Day 4 with the morning criterium being undertaken in the wet conditions. With a number of crashes throughout the race, it was very important to keep near the front and stay safe in the bunch. I was feeling very confident around the slippery corners, my legs felt fast and I was retaining a great position in the bunch. On the general classification leading into the criterium, I was in 7th place and I wanted to maintain this by going for a few intermediate sprints and picking up some handy time bonuses which I did, winning one and coming second in another. Nearing the completion of the race, only a small field of 25 riders remained in the race. Two riders managed to escape with 5 laps to go so my best result would be a 3rd. I had the speed in the finishing sprint but got boxed in whilst rubbing shoulders with Will Walker from Drapac who had a few kind words to me at the finish, despite my own view on who was in the wrong when it came to the final few metres. 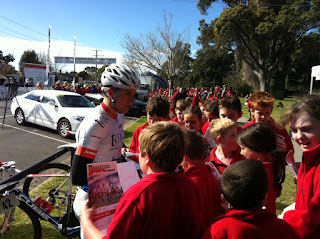 The afternoon’s road race was surprisingly dry with blue sky’s greeting the large field on a scenic stage from Lakes Entrance to Metung. A breakaway consisting of 15 riders went clear after 15km’s and I was unable to reach them feeling very annoyed in the main bunch that I had missed it. The course was a mix of short sharp hills, flat roads and steady climbs which was the perfect terrain for a breakaway to succeed. Approaching the last 5km’s, we were not going to catch the break but it was important to stay near the front with Michael Troy doing a superb job at positioning me in the right spot. Robbie finished in 13th and moved up to 11th on GC overall, whilst I slipped back to 19th on GC which I was very unhappy about. The final day of racing saw a 44km criterium in Paynesville take place on another fast street circuit. The wind was very strong and this strung out the large field with all riders desperate to keep near the front. After 25minutes of racing, I found myself on the tarmac at 50km/hr after I was brought down by a touch of wheels. My bike was unable to be fixed in I had to pull out of the race feeling sore and all grazed up, no major injuries, just disappointed to finish the tour on a massive low. Looking back on the 5 quality days of racing, I’m happy to have achieved two podium places with a 2nd in Stage 4 and a 3rd in Stage 6. I would like to thank my teammates who supported me and for the great times we shared together as a team throughout the tour. To my sponsors Torq Nutrition, Monza Imports, Bicycle Superstore, SRAM, Continental, Rudy Project and Zoot Recovery, I thank you all for the support of our team over the past week. This was my last race with Torq/Bicycle Superstore and I’d like to thank my main sponsors Dean and Gen from Torq Nutrition, for your support over the past 3 years. I have had the pleasure of racing with Torq, starting out as a Mountain Biker in late 2009 and then focusing on the National Road Series early this year. I’m very fortunate to have had the opportunity to ride with the team and be supported in my development which has seen me progress to the level I’m at today. I look forward to taking the next step in my cycling career as I will be joining the Number 1 ranked domestic road team, Genesys Wealth Advisors. Finally, I would like to thank my parents because without their support, I would not have been able to make the recent steps in my cycling career so, I’m very lucky to have such a supportive family. Stay tuned for the next race report in my new team when we compete in the Tour of the Great South Coast, 15-19th August. Cheers Brenton