It was another weekend away racing but before I could put a leg over the bike and line up on the start line, we had to endure a 4.5 hour drive to the town of Hamilton in South West Victoria, the location of Saturday and Sunday’s road races. Dad offered to come along for support over the weekend and I definitely couldn’t have been so prepared without him there. We arrived on Friday afternoon, watched the Tour de France highlights and set off to find a suitable place for dinner. After some last minute bike checks and gear preparation, I was ready to race. The first race for the weekend was the Cecil Shore Memorial Handicap which has a huge honour roll full of talented riders. The 120km handicap was an ‘out and back’ course with rolling hills and open cross wind sections. The out-markers had a 44 minute head start on us scratch riders who set off from the start at a blistering pace. At the turnaround point, we averaged 52km/hr and seemed to be working well together. On return, we were given a few time splits by the chief com so we had an idea of how much time we still needed to bridge between the leaders and our scratch bunch. With a bunch of Elite Scratch riders, the pace was certainly fast and with 8km’s to go, we had made contact with the leaders. Attacks started to emerge but no-one was able to escape. With 1km to go, I was position alright, maybe around 10th wheel, but when the pace briefly slowed, a huge group of riders swamped me and I was back into 30th place – a horrible position. 500m to go and I still was boxed in and almost gave up until I found a gap, put my elbows out, used a few head butts and muscled my way to the front. By the time I got there, I had used way too much energy and this proved to be the difference between myself and first. The Victorian Institute of Sport boys had 7 riders and they assisted their sprinter Jack Cummings to take the win. I completed the tough race to finish 2nd and come away with a handful of lessons to learn from. 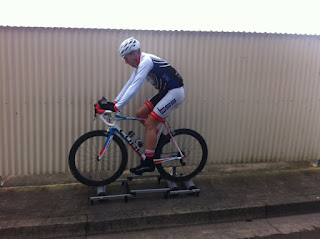 Sunday morning was upon us and the 2012 Victorian 100km Championships were about to begin. Once again, the quality field of riders made racing furious with a field of 90 being quickly reduced under the pressure created by many at the front. A short 8km course was to be undertaken 13 times and this made the racing very attractive for the spectators who came to support. After 15km’s, a break of 8 was formed and I made a good decision to join the move. We managed to stay away, increasing our advantage lap after lap. With 5 laps to go, a small group of 7 riders attacked from the main bunch and it wasn’t until the final corner (1km to go) that they caught us. Before the catch, one of the South Australian Institute of Sport riders attacked and rode away solo to take the win. Approaching the finish, 1km to go, a Charter Mason rider attacked and nobody chased. When I opened up for the sprint, it was full steam ahead to the line, I nearly caught the Charter Masons rider who was going backwards but I just missed out on 2nd by half a wheel. I should have tried to get across, I had the power in the end, but that's the lottery of racing. I think if there was an award for the most consistent Victorian rider this year, I'd be the red hot favorite to take it out to date! Let's hope I can crack that 1st position I'm after in the coming races. 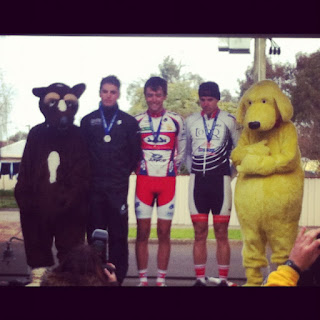 Thanks to my Sponsors Torq Nutrition, Monza Imports, SRAM and Bicycle Superstore, my parents for their support in assisting me to hopefully reaching my dreams one day and to my coach Matt Wallace for the help I receive to further my progression in the sport I love. Also, big thanks to all the Hamilton Cycling Club for a great weekend of racing and to the many volunteers and officials who made the weekend run so smoothly, it’s much appreciated! I look forward to my next race, where I aim to finally get the win I think I deserve! Keep posted for the report, Cheers Brenton