The usual Tuesday Night Sandown Racing always provides tough racing no matter who turns up.
On my warm up laps, the rain clouds were approaching, but by the start of the race, all we received were a few big drops from the sky. Lucky!

Tonight, the field was slightly smaller than usual and on the start line, I knew I had a good shot at another win. After an intense morning ride on the Mountain bike early on in the day, my legs were tired yet feeling good, if that makes sense.

The beginning of the race saw many small attacks go off the front of the bunch, but nothing lasted too long with most attacks being chased down by teams and sometimes myself on numerous occasions.

Tonight was different to many others nights as the bunch seemed to stay together for the majority of the race. Attacks were brought back straight away and most of the stronger riders kept a watchful eye on each other the whole night.

Coming into the last 15 minutes of the 60minute plus 2 lap race, my legs were feeling ok. Everyone knew that a bunch sprint would be on the cards at the finish tonight, but that didn’t stop the usual riders from trying their luck off the front in the remaining few laps.

Last lap had arrived, my CUBE hpc Road Bike from Monza Imports was ready to fire in what would be a dramatic run to the finish line. It’s not about the bike, it’s about the legs but I feel very comfortable on this machine which has been kitted out with a full SRAM RED Groupset form SRAM Australia.

1km to go and 2 teammates attacked and got a 150m gap. By the last corner, 400m to go, they had a good 50m easy. I sprinted earlier than usual, past the two front riders with 100m to go and held onto my 2nd win at Sandown, just in front of a fast finishing Alex Smyth. In any sprinters eyes, a sprint that was timed to perfection. 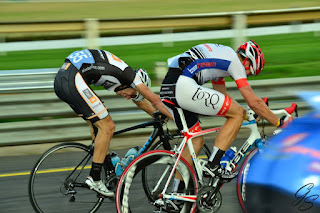 Off to Adelaide this weekend for the 2012 Australian Mountain Bike Championships, where I am hoping for a good result back on the dirt where my career started as a young junior not so many years ago.