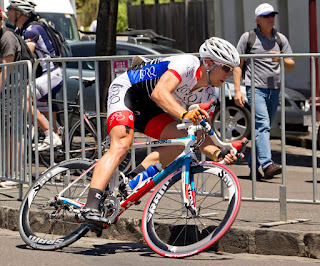 Under 23 Criterium
Without any rest coming straight from the Jayco Bay Cycling Classic, I was back on the bike the next day, racing in the National Under 23 Criterium Championships at Ballarat.
The weather was a little overcast but we were fortunate not to receive any rain during the race. My legs felt good coming of a solid week of racing criteriums at the Bay Crits, however, I only had 1 teammate – my brother, Jarryd to try and help me out during the race. The pace was on from the start with small groups attacking consistently. I managed to get in a few of them, but none of them succeeded. Jarryd departed the race after 25 minutes of the 45minute race which was a good job for a first year rider with very little k’s and intensity in the legs. I was now left to my own perseverance in a race I have wanted to win ever since my serious accident in June last year. Throughout the race, my heart rate was great and I found it easy to jump across to little moves off the front of the bunch and hold my position in the peloton. Coming into the last 10-15 minutes of racing, the teams got organised, the serious attacks went off the front and this is the time I would LOVE to have some teammates. It’s so much harder to maintain a good position in the bunch and be in the right place at the right times, which both form as the determinants for a good result.
Nearing the finish, I was out of position and did my best to dodge the traffic at the finish line to place 9th. Despite a large field of 71 starters and a handful of strongly supported teams working well together, I was satisfied to be the 1st placed Victorian rider and record a top 10 result in 9th position. Fingers crossed, 2013 will be my year to crack the title as it will be my last year in the Under 23 category. Lesson learnt; if you really want to achieve something, give it 110% no matter what, because 100% effort falls too short!!

Under 23 Road Race
12 laps….12 gruelling laps up that little climb they call Mt Buninyong. That was all it took to win the 2012 National road title. It sounds easy doesn’t it…?
Well, the 10.1km circuit makes racing the complete opposite. It’s tough, it’s mentally demanding and at the end of the day, you have to be a good climber to win the race. Judging by that last statement, that rules out myself but what’s the point of even starting a race thinking that.
Experience – that was what today was about. From the start, every kilometre was another kilometre of experience. I was positive and determined to give this race a red hot go despite the relatively true statements and the intense preparation I have had leading up to this race. Once the gun went off, the large field of 127 riders raced straight up the climb for our first lap. The pace was faster on the opening lap than it has been on previous years, but despite this, I was feeling good. It wasn’t until the 5th lap that I started to ‘switch’ on that extra climbing strength and begin to concentrate on lasting just that one extra lap. Climbing is something everybody must work on, and for myself being a sprinter, it’s something I have to work on even harder! After each single time that the bunch reached the top of the climb, it was straight into a cross/tail wind across the ‘top’ of the hill before a nice descent into the finish. 15 minutes was the consistent lap time for the majority of the race with the occasional faster and slower lap time. During the half way point, legs were good, heart rate was normal and fuel/fluid intake was great. Approaching laps 8 & 9, the pace began to increase with the Jayco AIS team controlling the tempo on the front. My teammates – Robbie Hucker and Jack Haig had the best chance at doing well so when Jack inappropriately got a flat tyre on the 9th lap, I did my best to pace him back to the group up the challenging climb. The pace was too high and unfortunately Jack didn’t make it back to the bunch. I also spent too many cookies trying to help Jack back so I said goodbye to my chance of winning on lap 10 when I opted for the nice looking chair in our team marquee. At this stage there was only 45 riders left in the race. At the end of the day, it was a solid day of racing with yet another lesson learnt; loose some more kilograms and improve my climbing ability.
Great job to Robbie and Jack who both finished the race mid-pack. 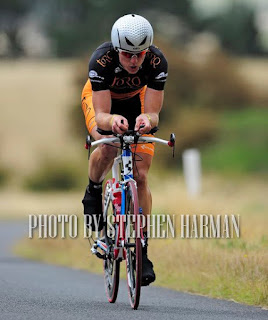 Learmonth is a nice little country town on the out-skirts of Ballarat and was the host of the 2012 Time Trial Championships. The course was relatively dead flat (27.1km), very open to wind with some slightly steep climbs with 6km’s to go. Riders went off at 1 minute intervals and I was situated behind fellow Victorian Eric Sheppard who 2 days ago got 2nd place at the National Road Championships at Mt Buninyong. Eric is also a very good at the time trial so for me to try and catch Eric would take one hell of an effort. During the warm-up, my legs were feeling good and I was ready to once again, gain some experience from a race which is not completely suited to me. As I set off, speed was good, probably a little too fast at the start, heart rate was also good and to top it off, at the half way point I was roughly 10 seconds to the better of Eric’s time (thanks to Jarryd for his team director role in my support car). In the end, this was not the best approach and I have since learnt the lesson to control my power output in the early stages (yet doing 50-60km/hr in the first 15km’s is pretty cool and you think you’re smashing it!! However, on the run home, it seemed a strong head/cross wind greeted my travels to the finish line and with the added climbs with 6km’s to go, I should have saved that little bit extra for the finish. A solid performance none the less, 34th place out of about 55 starters with only 1 minute separating 16th place-35th place (so I was about on par with my own time trialling ability and the ‘average’ under 23 time trialist).

A BIG thankyou to my sponsors TORQ Nutrition who have been a tremendous support throughout my past few years of racing and I can’t thank them enough! Our new Road Sponsors – Bicycle Superstore, thank you for supporting our new road team and I look forward to standing on many podiums wearing your logo. To our gear supplier – Monza Imports, thank you for your support also. The CUBE bikes are amazing and the Louis Garneau Clothing is not only comfy, but it looks good also. To SRAM for their support and supply of group sets which I must say are the best! To my family and the sacrifices you make to help me achieve my goals, it’s much appreciated and I thank you for all your support. My coach Matt Wallace – you’re a great coach, love your work and I’m pleased to be training under you. My teammates – both guys and girls, you are also a big part in my success and I thank you for the fun and helpful environment we share.

A short break and then it’s time to get back to work! Hard work and dedication is what I will deliver and I hope you keep posted for my success throughout 2012; this year will be a good one.