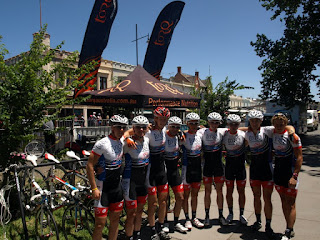 Day 1
It’s New Year’s Day, Christmas holidays are over and it’s time to put your race face on.
Day 1, Stage 1 at the 2012 Jayco Bay Cycling Classic saw furious racing take place amongst all categories. My new road team – Torq Nutrition/Bicycle Superstore lined up for our first race. The 45 minute Criterium race was on the Geelong Waterfront and the ‘hotdog’ circuit lived up to its reputation of having numerous crashes during each race. We were racing in the A Grade Men’s, Teams Support category which was hotly contested by all teams. Attacks were a consistent affair with riders all trying to get the upper hand in stage 1 of the Bay Crits, 4 race and 4 day series. For our first race, the boys did well to avoid the crashes and place well. I placed 5th, teammate Robbie Hucker placed 6th with Jack Haig getting held up by a crash on the last lap to finish with the bunch. Michael Troy and James Rix also did a fantastic job at the start of the race assisting the rest of the team and proved that they will be our number 1 team players when it comes to future races.

Day 2
The hot weather was out in force for the 2nd stage of the Jayco Bay Cycling Classic. 43 degrees was the race temperature for our race which was definitely not to my liking at all.
The pace was on from the start with most teams having a rider up in the early break after 10 minutes of racing. We sent Michael up the road but should have chased the break down due to the VIS boys having at least 3 riders in the break. It was a sensible race in the end due to the conditions which left most of the leading riders at a loss of energy by not only the end of the race, but the following day too! The Torq/BSS Team finished in the bunch with Michael Troy finishing in 7th place.

Day 3
Stage 3 is famous for its gruelling short climbs and strong cross winds which today, didn’t disappoint.
After two days of racing, our team were starting to find their feet and with that, came the teamwork we needed to get results. For the whole race, I was positioned in the top 10 looking after the team and planning what tactics we would play during the race. There was plenty of attacks throughout the race but our whole team kept their cool to ride smart, stay out of trouble and take the cake at the end. Robbie Hucker was the strongest rider on the day and stormed home to pass Eric Sheppard (VIS) in the final 200m to get the win ahead of Sheppard. I finished off a strong ride with a 3rd place and Jack Haig put in a solid performance to finish just behind in 5th place. Once again, Michael and James road very well to support Robbie, Jack and I throughout the race.

Day 4
The final stage in Williamstown is always known for a spectacular finish with the street circuit providing fantastic viewing opportunities for all spectators. I was feeling good today and with the team still on a high from yesterday, it was going to be another good stage for the Torq/BSS Boys.
We controlled all the moves throughout the race and I won the intermediate sprint at the halfway mark which then assisted teammate Jack Haig to make a solo attack to ride an individual break to the finish line. I shut down all the moves off the front to ensure no one was going to catch Jack who took the victory finishing just ahead of the fast approaching bunch. I still had enough left in the tank to finish 2nd on the stage and win the bunch sprint. Robbie finished in 5th to make it another top day for our team. Michael Troy smashed the field to bits in the last few laps to help lead me out into the last corner. James Rix rode his best race to support us throughout the 45mins and helped to bring back some breaks in the process.

What a great series it has been!!! A new team, a new year - and it's going to be a good one.
Off to National Championships in Ballarat for the next week, keep posted for my next race reports.