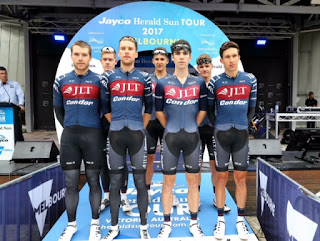 2017 has well and truly begun and joining my new team JLT Condor and starting the year off on a positive note was my number one goal. The first few races of the season included the Mitchelton Bay Criterium Series, the National Championships and the Herald Sun Tour. Here is my top ten most memorable moments of the season so far: 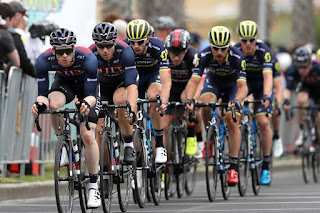 1. Team JLT Condor In a welcoming team environment, I felt comfortable being surrounded with such supportive staff and teammates, meeting most of the team for the first time was a nice moment and I’m looking forward to working with everyone this year. A fresh start is just what I needed and I’m grateful to John Herety for giving me a ride for the 2017 season. 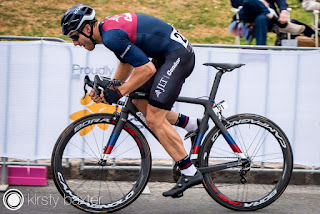 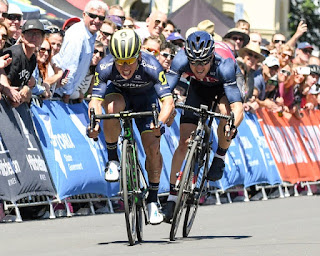 2. Mitchelton Bay Cycling Classic: The season couldn’t have started any better with my new teammates Ian Bibby and Matt Gibson going 1-2 overall in the Bay Crits Series. I was very happy to be sprinting so close to Caleb Ewan over the three days, finishing strongly to win the bunch sprint for 4th ahead of Ewan in stage two and making him work hard for his final stage win, finishing in second place at Williamstown, fourth overall in the series. We took out the overall Teams Classification as well, which made the whole team very pleased with the start to 2017. 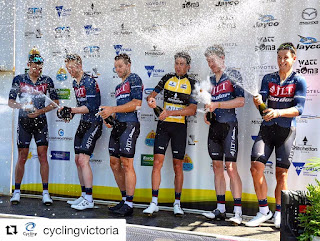 3. Podium finish at National Criterium Championships My momentum from the Bay Crits transferred into the National Criterium Championships where I was flying the flag solo for JLT Condor as the only Australian on the team. I had a smart race and was happy to finish on the talented podium in third place, just behind Scott Sunderland (2nd) and Caleb Ewan (3rd). Finishing with 1100watts for the final 30 seconds of the fast Criterium race was a solid effort as well. I’ll have to wait another year for the green and gold jersey, but I took a lot of positives away from the event! 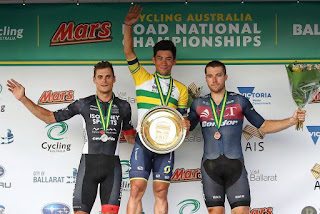 4. The Bendigo Sunshine After the National Championships, I spent a few days with the team in Bendigo preparing for the Herald Sun Tour. Some solid days with the team was just what I needed. A change of scenery and a chance to bond with my new teammates, enjoying their time ‘down under’ and away from the cold weather back home. Taking it in turns to cook home-cooked meals was a highlight from the camp and when I joined forces with our team coach Tim Kennaugh, we didn’t disappoint with a classic Spaghetti Bolognase, Zucchini Chips and tasty salads. 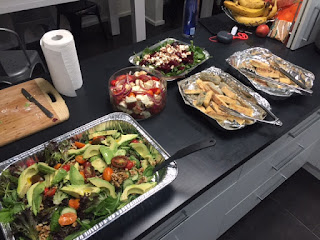 5. New bikes, gear and products Riding our Condor bikes with Campagnolo gearing. My race bike has electric gears and our tires supported by Continental are superb! The PedalEd clothing, Kask helmets, Fizik shoes and Oakley sunglasses are all top quality products as well. It’s sometimes a challenge setting up new gear, getting used to new kit or new shoes but I feel comfortable and relaxed which is really good for the mind. The less stress you can have as a cyclist, the better you’ll be mentally! 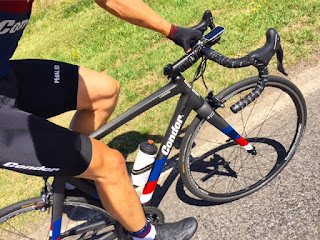 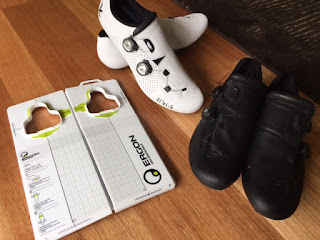 6. Australian Team Selection for Race Melbourne Being selected to ride with the Korda Mentha Australian National Team in the Towards Zero Race Melbourne Kermese on the 26th January alongside the World Tour Teams was a nice memory. I was very grateful for the opportunity but had some unfortunate mechanical issues, spoiling my chances of a result. My electronic gears had a freak glitch where the system shuts down with no use of any gears. It happened with only 2 laps to go before the sprint and on the fast tailwind finish, I was stuck in the 53/15, hitting 145cadence for 5seconds and 140 for 10seconds! A highlight was wearing the National Team colors on Australia Day in front of family and friends. 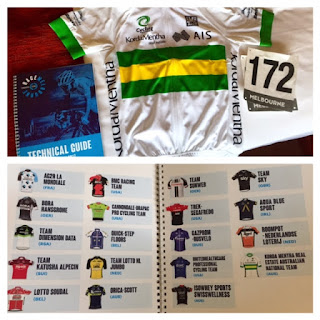 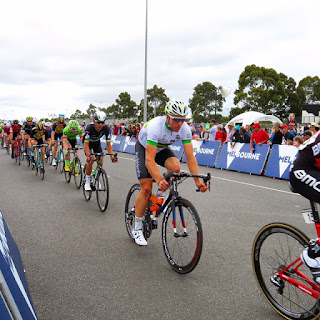 7. My support network Riding for a British Team, I was on my own at the National’s but I had my own support team with my parents helping me with accommodation, brother’s Jarryd and Mitchell for mechanical duties, plus Jarryd’s girlfriend Claire and my girlfriend Lucy as my two supporters and feed-zone helpers for the road race. 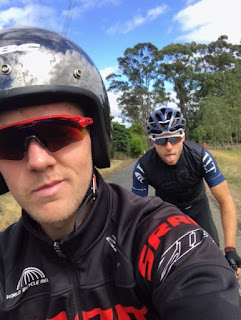 Riding a new bike, they need to feel fast and comfortable and thanks to Jason Nichols from I.O.S (http://www.ios.com.au), my new set-up is spot on! 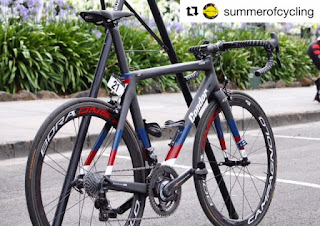 I worked with Toby Jillings in 2015 & 2016 and his small business, Toby’s Soft Tissue Therapy, has been excellent in making sure my body is always ready to go. I’ve needed some work after the busy start to the season and he has always looked after me, check him out: https://www.facebook.com/TOBY-Soft-Tissue-Therapy-1423079011318187/ Having already been involved in some crashes this season, I visit my Chiropractor Nicola from GSE Health when back home in Warragul, Gippsland. Nicola has aligned my body several times as I see it as an important part of my recovery. (http://www.danielwillischiropractic.com.au/warragul-chiropractor.html This is the 8th year I’ve been working with my long-term coach Matt Wallace (http://www.coachprobikefit.com), who is always assisting in my program design and monitoring my performances, it’s great to see new results every year as we work hard to find improvements. I’m appreciative of everyone who supports my journey and I can’t thank them all enough. There are many others who follow and support me that I haven’t mentioned, and it’s thanks to everyone that I continue to do my best on and off the bike. 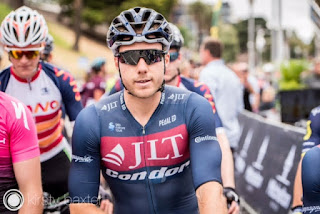 8. Mental preparation With some ups and downs, it was important for me to look at each day as a new one, start fresh and prepare mentally for the tasks ahead. With the disappointment at Race Melbourne, I set my sights to impress at the Herald Sun Tour. The preparation and the time I put in to re-focus following a set-back paid off in the end. Finding the positives in a situation and visulising where I want to be has helped me get through the challenges. It’s a tough sport, so you need to keep strong in the head. 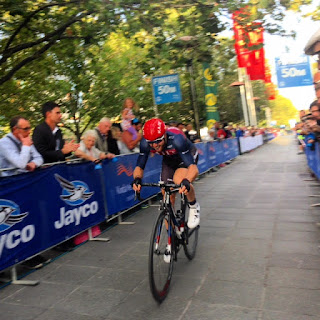 9. Herald Sun Tour Podium I had two targets for this year’s HST, the opening prologue and Stage 3 sprint finish into Nagambie. A great ride saw a podium finish in second place for the prologue, just behind Team Sky’s Danny Van Poppel. I was happy with my ride, which was so close to a win, averaging 600w for two minutes and improving my time from when I raced in 2015 by three seconds! 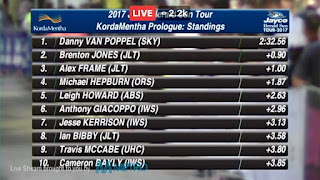 10. Crashing in Nagambie Unfortunately you can’t always stay upright and getting caught in a crash close to the finish of Stage 3 at the Herald Sun Tour was my moment. Van Poppel was one of the first riders to come down and being positioned well near the front just behind him, I couldn’t avoid it. No injuries and little damage to the body was the only positive to take away from the day. A race target of mine, wasted. 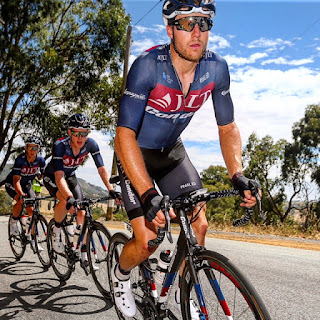 What’s next? Only a few more weeks here in Australia, I leave on the 23rd March to race the Tour of Taiwan with JLT Condor, then I fly straight to U.K were I will base myself until October. I’m really looking forward to the races I’ll compete in and the new life experiences I will create this year. 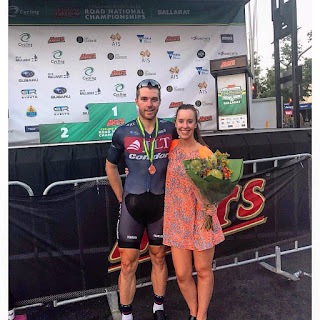