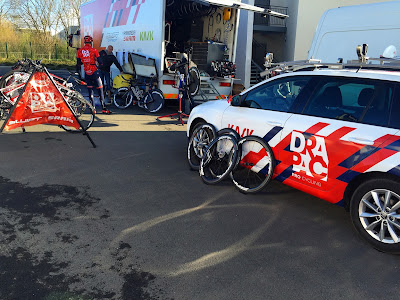 Adelie:
As we made our way across the European countryside from the team house in Belgium to the south west of France for the Route Adelie de Vitre, we were in high spirits about the task ahead and hoping to start our European campaign on a high.

The picturesque landscapes offered up the perfect training terrain in the days leading up to the race. The team explored many local loops and thankfully the weather held off for us.

With a nice little set-up, the team travelled in comfy style in the team camper, two team cars with the race truck completing our convoy.

After signing many notebooks and printed profile cards from passionate French cycling fans, we signed on for stage one, collected our race food and wired up the new race radios. The sun was out, but a crisp 13 degrees was still a little chilly in the beginning.

Riding in numbers at the front, Peter Koning cemented his spot in the early breakaway with the rest of us saving as much energy for the final part of the race.

A demanding circuit, the short climbs drained energy every lap and it was a sprint of the strongest left at the finish. I was happy with my riding in the closing stages of the race, making the front split and giving it a crack at the front coming into the finish. 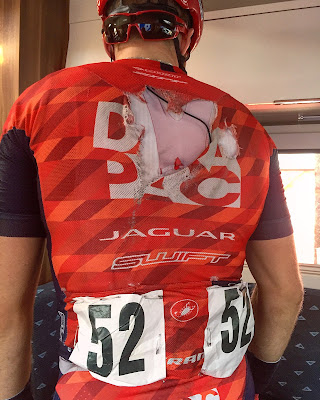 Teammate Sam Spokes buried himself to support me in the finish, but with 500m to go, coming into the first of three technical corners, we were both cleanly taken out from underneath and that put an end to our race.

Disappointed not to have finished with a good performance, but we held our heads high, taking away the positives we gained and focusing on the next one. No injuries for either of us, so we came away relatively unscathed. Welcome to France! 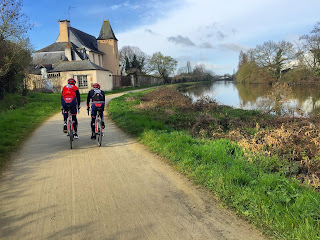 Paris Camembert:
The second of our French one-day classics saw a solid 205km course, with the weather holding off and another dry race that was greatly appreciated by everyone.

After 105kms completed, we reached the finishing circuits that compromised of short but steep climbs, destroying the field over each one. Our objective was to give Sam Spokes a comfortable ride throughout the day and place him in good position on the deciding finishing circuits.

My day wasn’t as smooth as I hoped, puncturing not once, but three times throughout the race! It didn’t aid my recovery between the climbs that’s for sure.

It was the last puncture that put an end to my race, not being able to rejoin the fast moving peloton in the closing stages of the race. The big Jens had done his job and joined me on my way back to the team bus for recovery and a shower. 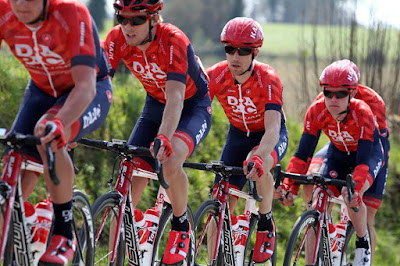 The boys fought on, each having specific roles to fulfill from our team DS Tom Southam. In the end, Sam Spokes and Brendan Canty finished in the front group. Having a crack in the finish, Spokesy finished a respectable 12th.

Gaining new experience and having a go is what I can take away from my first two French on-day races.

I’ve had my share of punctures and a crash, which ended my Route Adelie race chances, so it can only improve from here.

After two solid race days in the bank, another rest day and we hit the ground firing in our first tour, Circuit de Sarthe, a four-day stage race. 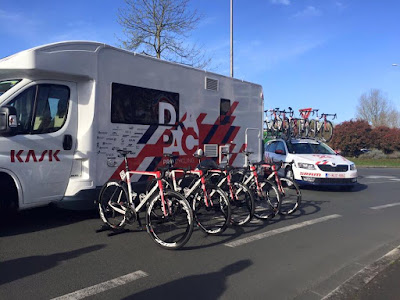 Sarthe:
After coming off two solid one-day races against some strong French teams, we continued our travels south en route to the next race, the Circuit Cycliste Sarthe, a four-day long, five stage tour.

Being an Australian team, it seemed a little strange that out of the 13 staff and riders, only three were actually Aussie. Trav, Kerby & BJ represent! Most nights at the dinner table were spent trying to translate the Dutch conversations and jokes… good times. 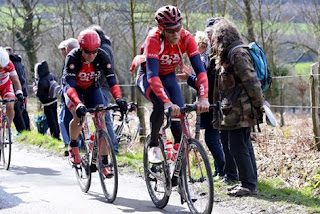 The racing was pretty solid, with five World Tour teams and a lot of hungry Pro-continental teams. The weather was as kind as it could have been, with only one day of light hail and showers.

Jordan Kerby is known to be a little hot-headed at times, he kept calm for most of the stages, but you knew when he got angry cause you’d hear him abuse someone for getting in his way or doing something wrong, It was quite the laugh for the rest of us.

After stage one, Kerby got sick and ended his tour early, catching the train to the team house in Izegem the next day. 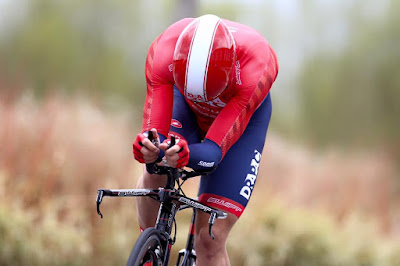 The TT stage was solid, most of us riding near-PB power and posting solid times. Jens was our best in 17th, a solid 505w avg for 6.8km, not bad from the big fella.

Travis Meyer was helpful in positioning and has good form at the moment, assisting wherever he could.

Tom Scully (Scud) battled on to finish the toughest stages (one and three) in the front group, holding onto his 23rd on GC overall – a solid performance from the kiwi who’s riding well. He showed some HP in the lead-out on the final stage as well. 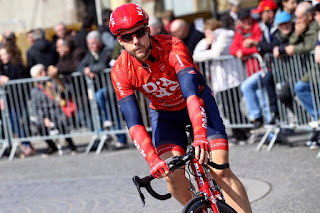 I bashed bars with the sprinters on stage 2a & 4, came away with 6th both times. Room for improvement moving forwards, but it was good to be in the mix with nice support from the boys.

When push comes to shove we can all hold our own. I stamped some authority over the AG2R team on the final stage when we wanted position to ride behind leading teams Direct Energy and FDJ with Jens helping them to ride the front and bring it back for a sprint. I didn’t go as verbally crazy as Kerby would have, but I kindly told them to go away, using some physical contact to show intent in what we wanted. 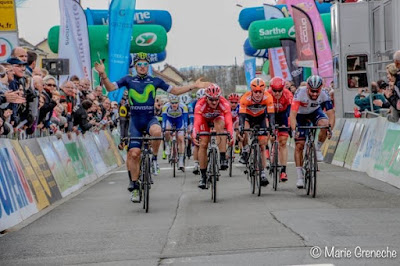 The only crash of the tour came on the final stage, with a Team Wanty rider deciding to go for a swim, going over the bars, missing the bridge and into the river. A few other riders decided to drop themselves in the middle of the road too. We missed the action but had a front row seat of the carnage.

After we finished up the final stage, we headed back to the Ibis Le Mans and spent some time before dinner with a few games of ten-pin bowling.

What we established from bowling is that Stilts may tell us he’s doing an indoor ergo, but what we think is he’s actually practicing his game at ten-pin bowling back in Holland. Can bowl! Scud must love being in the gutter a little too much and the rest of us posted reasonable games with a good time had by all.

We also came up with a good punishment if you pull out early from the race – you have to walk around the finish line in team kit whilst handing out team bottles to the fans and signing autographs. 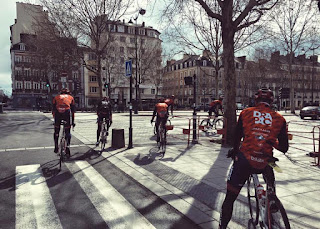 Despite the pre-race statements from some of the team to expect the worst from France, the food and accommodation wasn’t bad at all!

A nice way to finish our time in France, the racing was strong and we were active and in the mix on most stages.
Next up is Castille Y Leon in Spain from the 15-17th April.