Tour of Hainan, victory is sweet.

I’ve had never been to China prior to this race, but having raced in Asia before, my expectations were on par with what we encountered throughout the 9 days of racing. 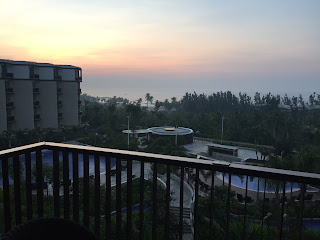 The Tour of Hainan took place in what they call ‘Chinese Hawaii’, an island and region called Hainan. There was some picturesque scenery along the way, with some of our hotels situated right on the beach.

Unlike most other Asian races which see teams transferring hours before and/or after the stages, the Tour of Hainan saw us start and finish within a short ride from a new hotel each day. 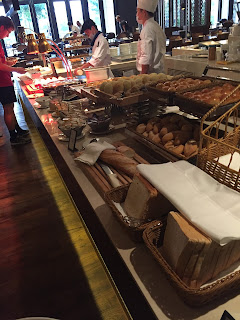 Before we left home, I made sure I packed the essential foods I needed for my time away. Rice can only get you so far and because we are clean athletes and follow the ASADA doping whereabouts program, eating meat contaminated with Clenbuterol was not an option. My go-to foods included tinned Tuna, Baked Beans, Almonds, Whey Protein and some homemade Peanut Butter and Date Protein Balls. It was what I needed to maintain my performance in what was a very basic selection of rice and eggs and vegetables at the buffet each day. 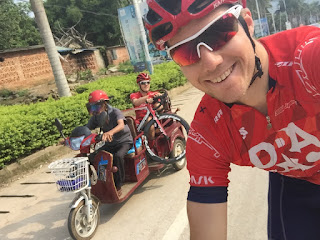 Joining me for the last race of the season, were my teammates Peter Koning, Graeme Brown, Bernie Sulzberger, Adam Phelan, Trav Meyer and stagiaire Brad Evans. Our goal for the week was to win two stages. 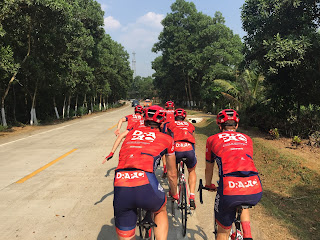 Here are some of my highlights and memories from the week on Tour.

A hard crash at the finish on stage one. I was in great position, but got squeezed into two riders with 3kms to go, crashing hard and sliding on my back at 60km/hr. My left shoulder was quite sore (and still is), but I luckily walked away with grazes and half a roll of fix-a-mole (bandages) on my back. 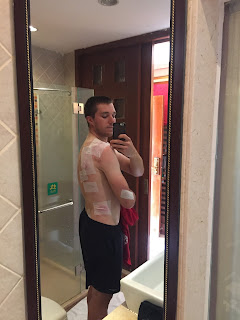 A super strong lead-out from the boys on stage two, put me in great position to finish in fifth. The five-star Hilton hotel with beach views and a quality bed prepared us for the 240km stage the following day. 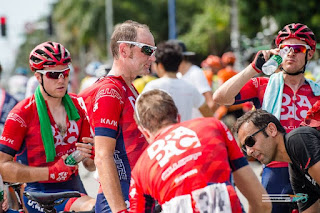 With long stages, our ability to recover faster and perform on a daily basis would require a combined team effort from staff and riders, both on and off the bike

One night, while I was fast asleep, my roommate Brad woke me up with his light beaming and searching his bags. He told me “I’m looking for the rat, it’s been rustling the bin and searching for food!” I went to check my small collection of leftover food from the days stage, turns out the rat ran away with a Sponser Salty Nut Bar which I was looking forward to the next day! It was a good story to tell the boys at breakfast the next day. 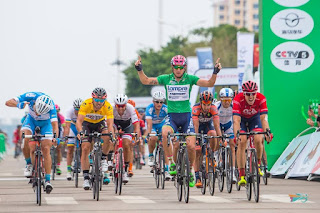 Another textbook lead-out spear-headed by our captain and my last man, Graeme Brown meant I placed a close second on stage four to Lampre’s Sacha Modolo, the winner of a stage at this years Giro d’talia.

A very strong result on the second last stage by Adam, saw him hold onto the leaders over the climbs and place 8th on the stage, with great the support of the whole team. 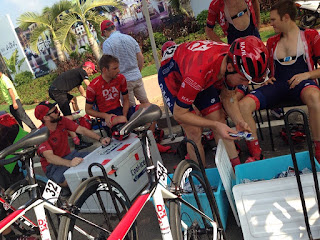 Teamwork, sacrifice and persistence paid off on the final stage of the Tour.

Some super strong riding from Peter, Brad and Bernie saw the peloton remain together for Trav to collect some KOM points on the hotly contested short climbs of the day, and a great effort to Adam for giving the intermediate sprints a go with textbook lead-outs, moving himself up to finish 8th overall on the general classification. 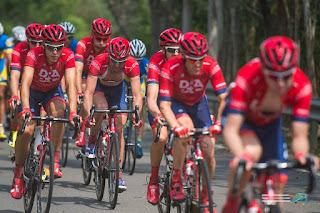 The fast and furious stage saw many teams try and take the victory, but with great sacrifice and strength, the boys got both Brownie and I into great position with 1.5km to go. Banging bars and elbows out, I muscled my way onto a good wheel, Brownie keeping me relaxed and providing a safe wheel in front of me to follow. 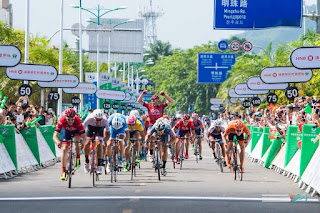 Around the last corner, 500m to go, I was composed and hungry for the win, I waited until 200m to go and launched my sprint, straight down the outside. My hands went up and it was an amazing feeling to take the win! It was such a nice reward for the team’s super hard work and dedication and was an awesome way to end my first season as a neo-pro with Drapac Professional Cycling. 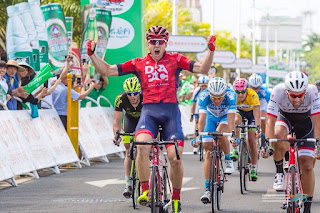 The TV motorbike camera man even said to me; “it’s finally great to see someone so excited and emotional!” He was right; words can’t describe how exciting it was after the finish, I thanked the guys so much for their support. Without them it wouldn’t have been possible, we left it all out there on the final day. The spirits were high and it’s fair to say we all enjoyed ourselves at the after party later that night, closing out what has been a great year. 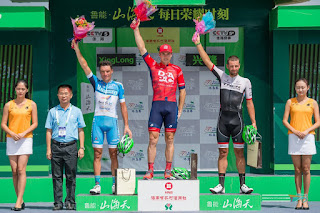 Behind the spotlight, there’s more to racing than is portrayed in the media. It’s a hard sport and sometimes it’s not as easy as it seems. I’d like to say thanks to our masseurs, mechanics, doctor and team director, who we wouldn’t have been able to achieve success with this week without.

To everyone else in my support network, thanks for everything! My appreciation can’t be explained enough in words.

I look forward to a relaxing off-season, catching up with friends and spending time with loved ones before the hard work resumes for season 2016.