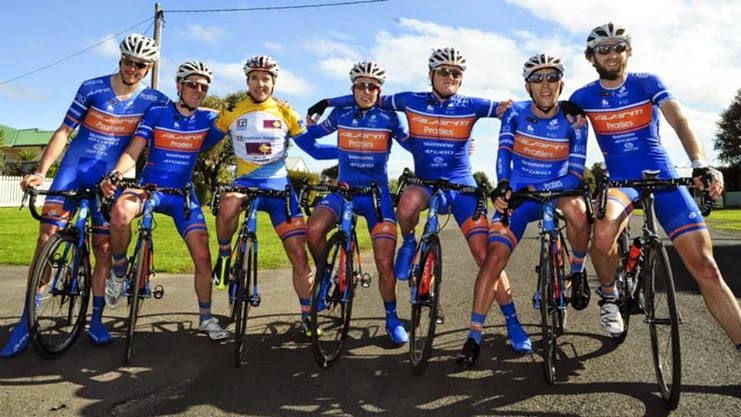 People often hear the words, ‘dreams come true’ and it’s something I realised for the very first time in January when I won the overall classification at the Mitchelton Wines Bay Cycling Classic, a race I’d been around since I was a boy.

Training was going well, I was healthy, but most importantly, I wanted to make sure I finished on the top step this week and make-up for the unfortunate mechanical which cost me glory at Murray.

This year’s tour consisted of five days and eight stages of racing, making it a solid tour to say the least.

National Road Series events don’t usually consist of double staged days with a race in the morning and afternoon, but the Tour of Great South Coast is renowned for its doubled days. 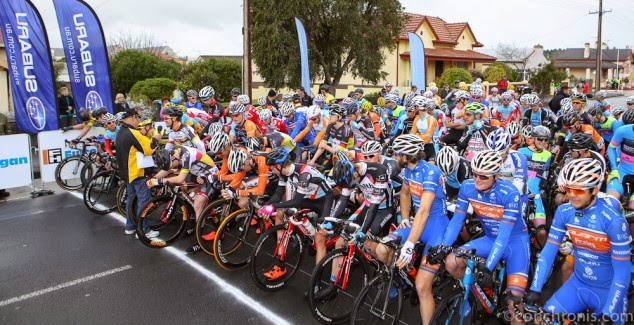 On day one, the weather was living up to everyone’s expectations, wet, windy and cold, but we got through the day in a solid position overall. I picked up two-second places and Jack was in the lead of the King of the Mountains Jersey. 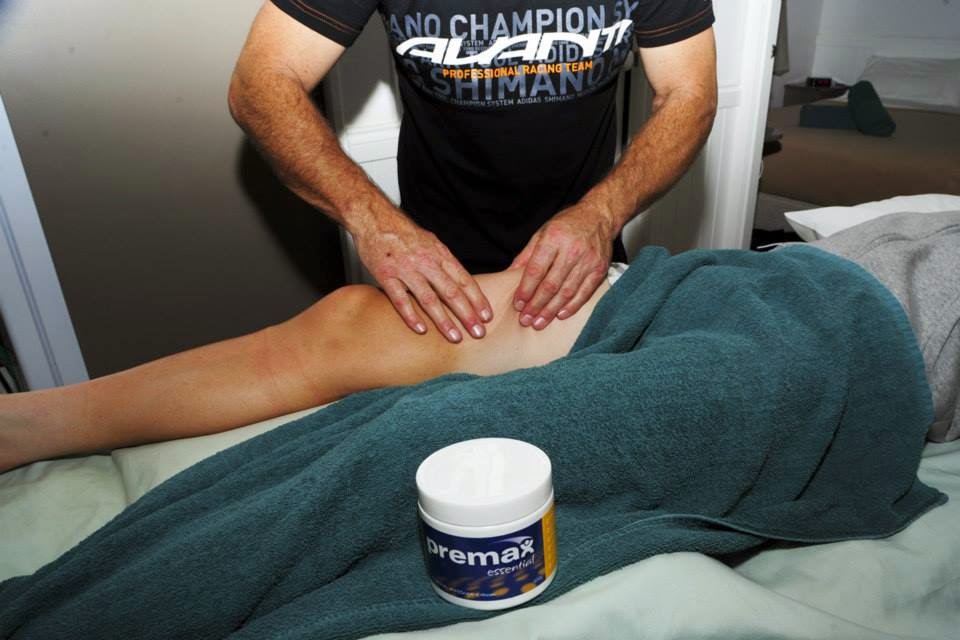 That night, some quality work in the kitchen (in between washing bikes) from team staff member Neil Walker saw us enjoy a delicious Spaghetti Bolognese, topped off by our regular massage treatment we receive post race.

Because I love competition, to keep me focused whilst on tour and off the bike, I’ve recently played the iPhone game, Temple Run. My challenge every morning is to beat my highest score and on day two I set a PB. Not only did it set the tone for the day, it gave me confidence and belief ahead of stage three. 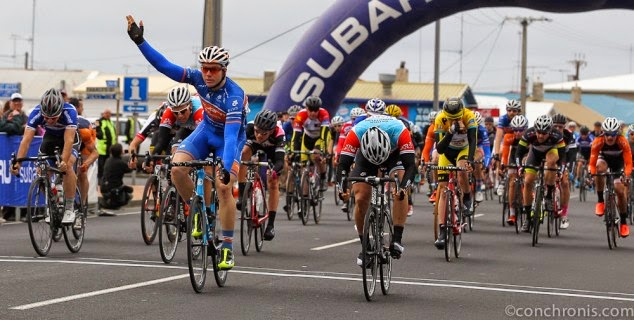 Later that morning, persistence paid off with a solid lead-out in the finale helping me to cross the line first, and taking the leaders yellow jersey in the process. It was a tremendous team effort from the boys, they’re all so strong in the finishes and to reward them with a win was the least I could do.

Our job from then was to hold onto the jersey and luckily for all of us, the weather had improved, the best weather the tour has seen in years!
A combination of light winds and patchy blue skies made conditions perfect for defending yellow and on day three, that’s what we did. 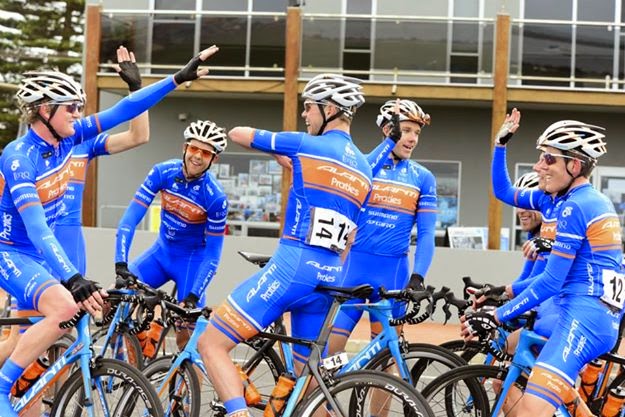 Leaving the cabins for the morning’s criterium in Portland, the team vibe was great and the sunshine was out on display. Despite a crash in the warm up practicing fast corners and new lines, I wasn’t deterred at all because I was starting the race in yellow. I ended up placing second on the stage and scored enough bonus seconds to retain the overall tour lead. 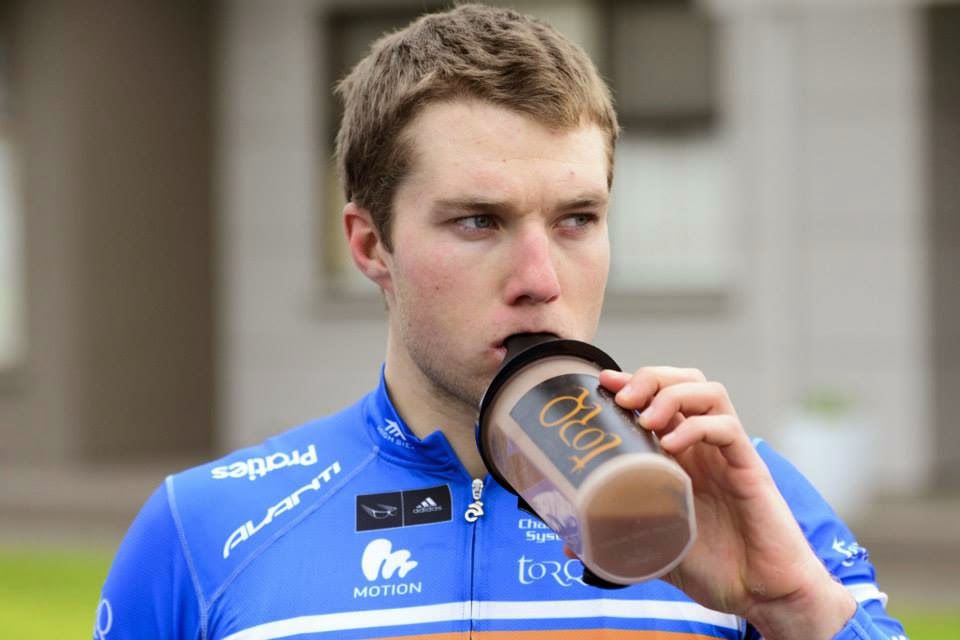 In between the double staged days, we make sure we consume enough water, food and a Torq recovery drink prior to the second stage start in the afternoon.
There isn’t much time to spare, so I like to make sure I’m fuelled first before I focus on anything else outside of that. 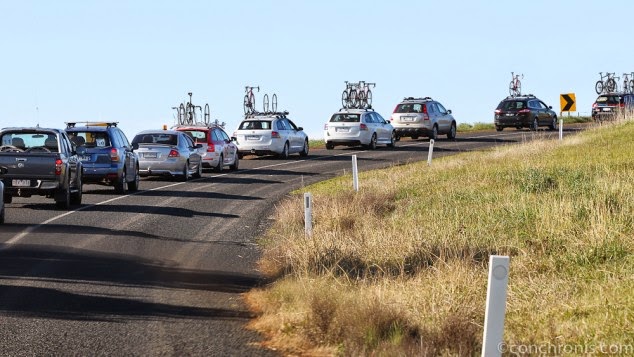 A lumpy stage five was aggressive from start to finish with only one small break riding away, only to be controlled by the boys before it was brought back.
The finish was hectic, a messy last 10km’s had everyone on the edge but the team did an exceptional job to bring the attacks back and set me up perfectly in the sprint where I finished second and retaining the yellow for another day. Neil Van der Ploeg was my final lead-out man and because the boys did such a good job, he held on for third on the stage also. 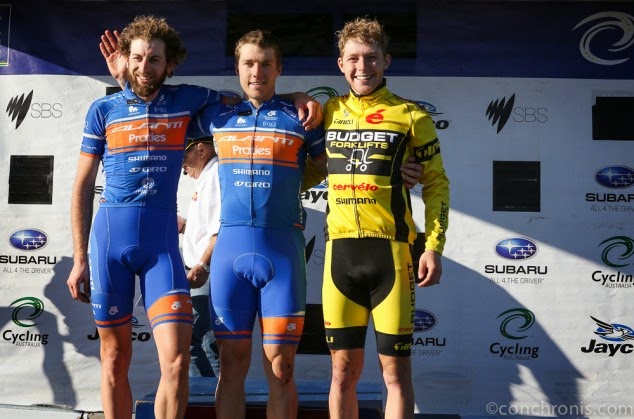 There are a number of things I focus on off the bike when on Tour and one of those things is my social media. I’m talking about how much I use it or in this case, how little I used it.

The results, pictures and reports from the tour are all covered in the media, so I don’t see any need to update any social media when my focus is on racing, winning and recovery. Even when I won a stage, I restricted myself and focused on the job, which wasn’t finished yet. 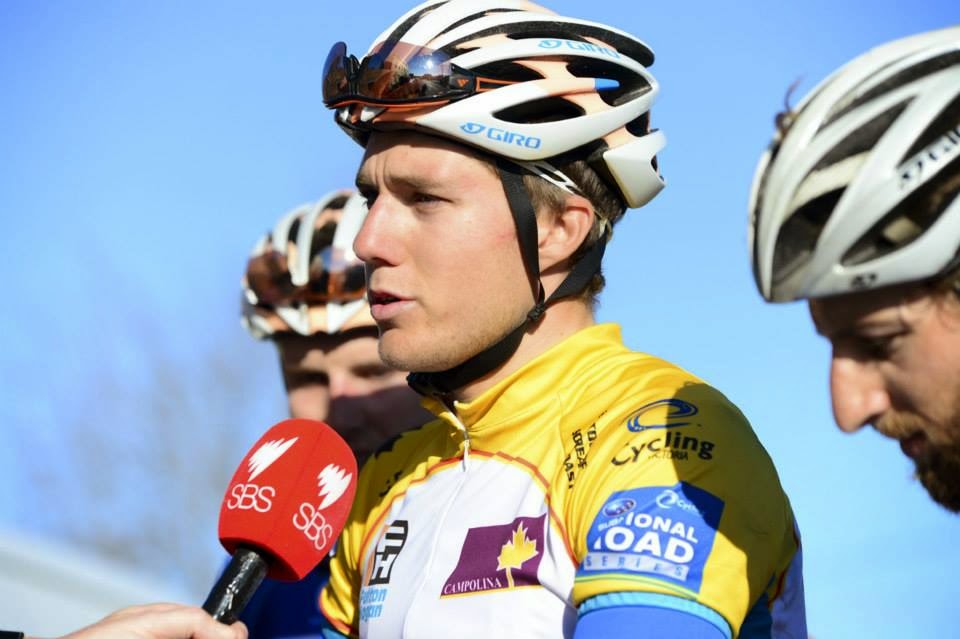 Perseverance was the key in stage six with a narrow 10 second lead being increased to 20 seconds by the conclusion of the stage. Avanti’s DS, Andrew (ACJ) told me that I needed to pick up valuable bonus seconds in the nine intermediate sprints if we wanted to hold a firm lead overall, so including another second place finish on the stage which was won by a solo breakaway rider, I had earned 14 seconds and increased my lead to my nearest rival, Pat Shaw  and Jesse Kerrison who were 20 seconds behind.

Fortunate enough to have a big team bus, we re-hydrated and re-fuelled our bodies before the seventh stage, a road race from Koroit to Peterborough taking in the sights of the Great Ocean Road.

Light winds presented opportunity for dangerous attacks but the team did yet another great performance to control the moves and put me in an ideal position leading into the stage’s toughest climb.

Team Budget took up the pace shortly after and we raced up the climb at a furious speed, the peloton all strung out.
I was behind Neil Van der Ploeg before responding to Tim Roe and Cam Bayly’s accelerations. My teammates continued to bury themselves in the finale to give me another shot at the stage. I was on Jesse’s wheel in the finish and despite coming home strong, he got the early jump and took the stage win.

With only one day to go, Jesse moved back to second place, 12 seconds behind me on the GC standings. So the race was still to be won with just one stage remaining. 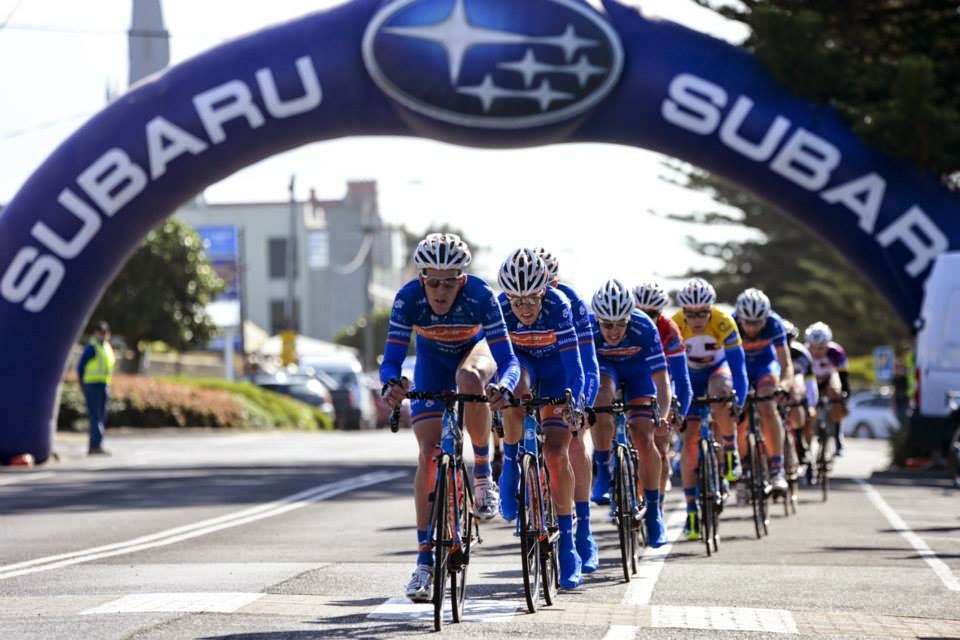 The team vibe was good, with everyone ready to do their job. My bike was working well or shall I say, having more luck than at Murray. There are some days you just know you’ll perform and Sunday was one of those days. 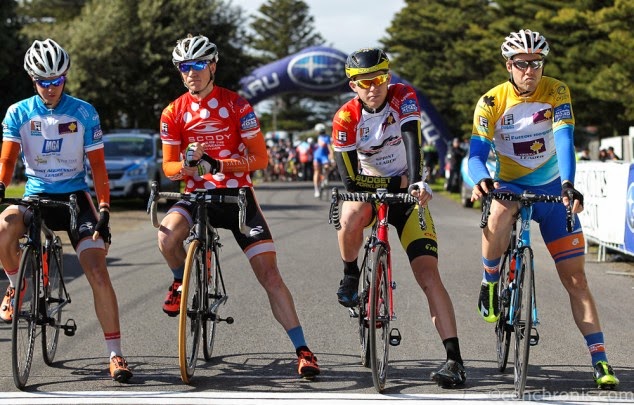 The 50km Kermesse had nine time bonus sprints, worth 3, 2, 1 seconds respectively, so Team Budget made sure Jesse had a shot at nearly every one. I followed him like a hawk and although he finished ahead of me in the first four sprints (only by 1 place each time), I won the fifth sprint and I noticed a change.

I was feeling stronger, becoming hungrier, and Jesse was starting to fatigue. Everyone is in the same boat, it’d been a long week but my form is really good at the moment and I wasn’t going to back out, I needed to finish it off for the team because that was my job.

With four laps to go, Jesse came up to me, shook my hand and said, “well done mate.” I knew I had it, I just needed to finish the stage upright. 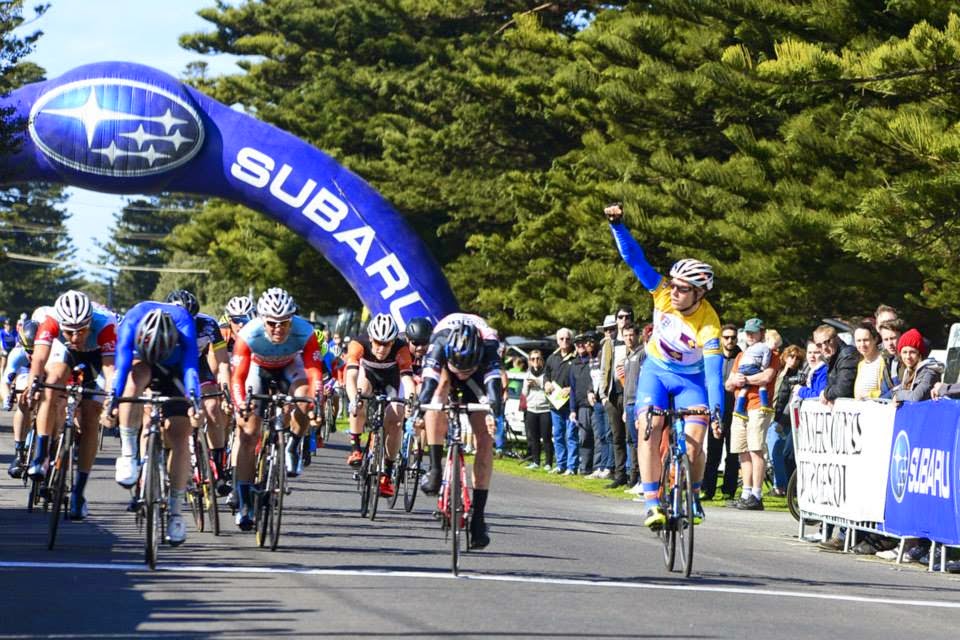 I was that excited at the finish that I came out of the last corner in about 20th wheel with 500m to go, then thought ‘why not sprint?’, so I did and managed to place on yet another podium in third. WE DID IT!!!! A win for Avanti, something we knew we could do, but were waiting to prove.

I can’t thank the guys enough, the sacrifice, teamwork and support they gave me is something I wont ever forget, they’ll be repaid. 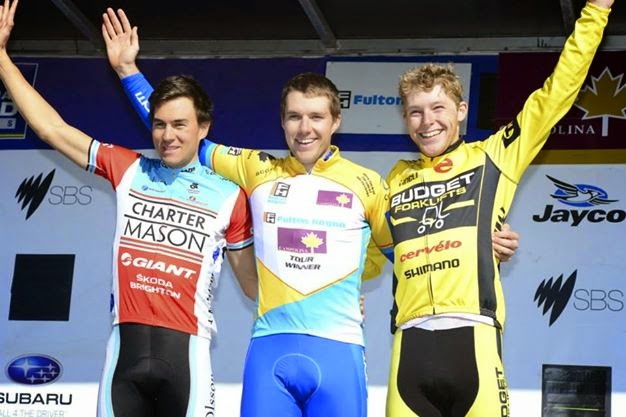 To finish the eight stages with two wins, five seconds and one third is pretty incredible. It wasn’t an individual performance and goes to show how well we rode as a team. 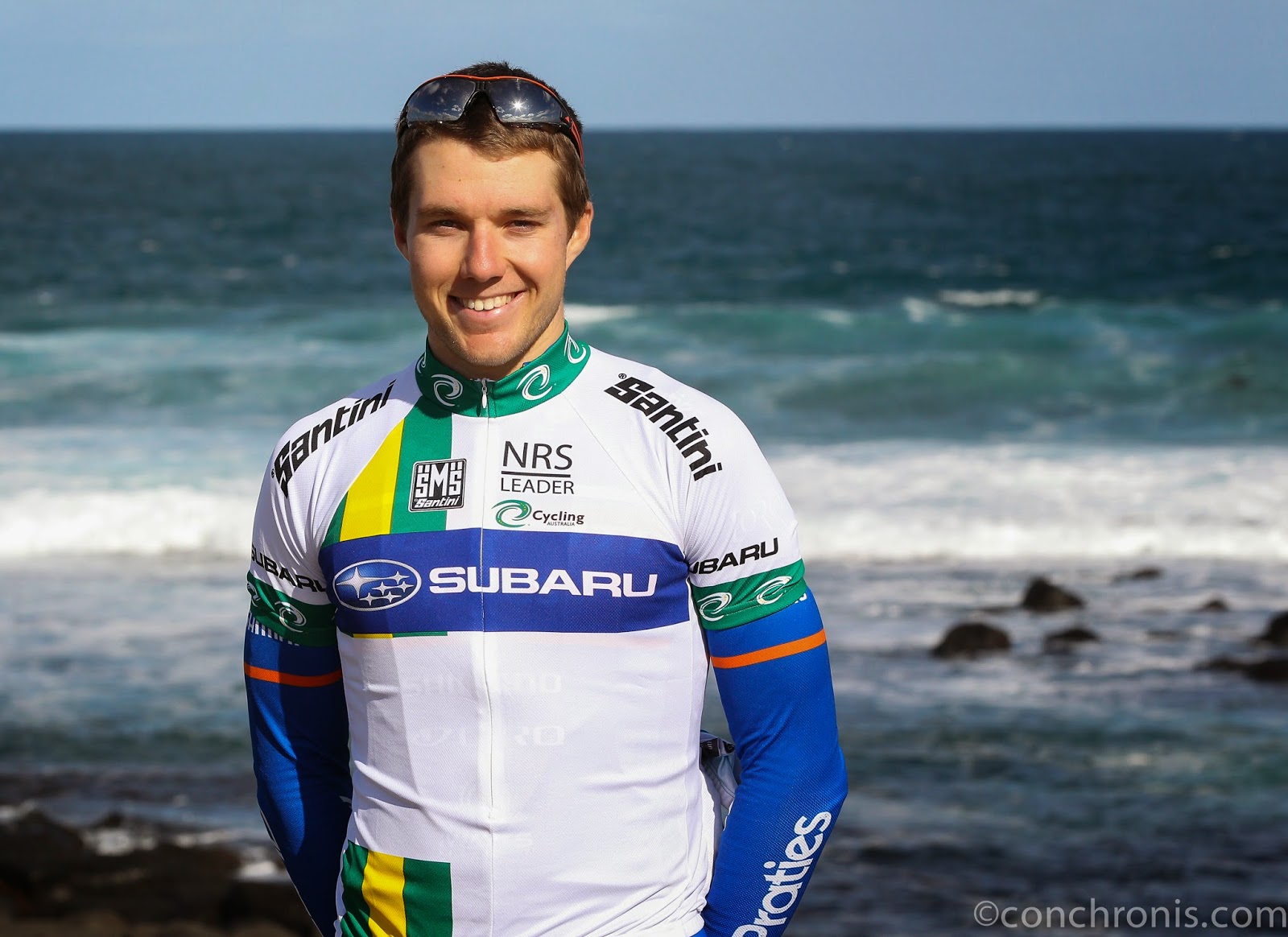 On top of the Tour success, to now be leading the Individual National Rankings has made the hard work over the years seem very rewarding. I’m grateful for the opportunities that ACJ and the team have given me, it’s been a long road but proves that hard work on and off the bike and a lot of teamwork can achieve some great results. The leaders jersey may have been taken from my injured teammate Joe Cooper, but it remains in the Avanti family and that’s what it’s all about!

If you would like more detail on the individual stages, these professional media releases are a great insight into the five days of racing.

A big thank you to the sponsors from the Avanti Racing Team, our supports and staff who make our success possible. To my family, especially mum and dad, thanks for your continued support and valuable guidance, which have helped me to reach my targets. Thanks to my lovely girlfriend, Lucy, who always encourages me and provides comfort away from the bike. My coach Matt Wallace, thanks for the years of hard work behind the scenes, it's great to see the training result in some nice achievements. A'qto Cycling has recently offered to assist in some off-bike casual clothing and I'm delighted to partner with them. I love their cycling inspired casual clothing and I encourage you to check them out. Continuing their support, Diadora Australia have been providing me with racing shoes for the past few years, the new Vortex Pro shoes are unbelievably comfy and light, so thank you for the support.

Back home training again, I'm looking forward to the next event on the NRS calendar, the Tour of Gippsland which starts on the September of 3rd. We have a strong team for this race and see's the return of teammate Joe Cooper back from his injury.
Labels: Avanti Racing Team National Road Series Overall Tour Win Stage win Tour of Great South Coast Yellow Jersey