The perfect warm summers evening in Ballarat greeted us for the 2014 National Criterium Championships which took place around Sturt Street on a 1.2km hot dog circuit. In my first elite national championships, I was looking forward to the step up into the big league, but I’d be racing against guys who’d have a lot more experience than I. For Australian riders, the national champs are one of the biggest races for the whole year, so to win one means your preparation is perfect and your form must be at it’s best. This year for Team Avanti Pro Cycling, we had 8 riders representing in the elite category. We had a strong team and our plan was to be prominent at the front and if it was a bunch sprint, the boys would lead it out for me. Knowing my team were trusting me to get the job done made me even more motivated. Fresh off my Bay Classic win, I was feeling good and ready to race. Mid-way through the race, we were all riding smart, doing our various roles as part of the team. The pace was fast and the field strung out at numerous times, creating gaps between the front, middle and back of the peloton. Our team got to the front with six laps to go and began to take up the pace making. It’s a very hard course to get a lead-out train going because the front straight is uphill and the back straight is a fast downhill making it hard to maintain a constant speed and it also provides the competitors with a nice slipstream on the downhill. The boys did an incredible job to keep us in great position at the front for the final few laps, despite being challenged by team Drapac in the closing few laps. With one lap remaining, I was with AJ and Neil who were fighting to stay at the front. Around the top hairpin corner, team Drapac’s front lead-out man slid out and lost his front wheel, causing his whole team to crash out of the race! It was a huge interruption to the final lap, but we just missed the carnage thanks to a move by AJ up the inside of the corner moments before. Down the back straight, AJ and Steele Von Hoff (Garmin-Sharp) made the most of the confusion, and ended up with a 20m lead, with me chasing hard to get back on AJ’s wheel. Around the last corner, AJ and Steele had a convincing lead, whilst Cam Meyer had put in a big effort to fly past me and close the gap. I was still in shock from what had happened on the previous corner but with 300m to go, my only chance was a bronze medal and I wasn’t going to give up on that chance at all. I gave it everything I had left and pushed hard to pass Cam and cross the line in third place, only a wheel behind my teammate AJ who finished a respectable 2nd behind Garmin Sharp’s Pro Tour sprinter, Steele Von Hoff. 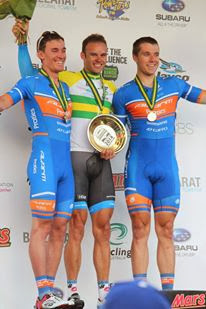 At the presentation, all three of us were so happy for one another as we are all great mates. In the words of Steele; “This would have to be the best podium I’ve ever been on”. The podium couldn’t have been any better, basically a ‘clean sweep’ for the ‘Genesys/Praties’ family, riders and staff. It was also a nice 2nd and 3rd for the newly named Team Avanti Pro Cycling. We left the criterium with a lot of confidence, not only for the road race but the rest of the year to come. I’m sure with results like this, you’ll see more of the Avanti team colours on many more podiums throughout 2014.