The Tour of the Great South Coast offers something for everyone from criterium races to challenging road stages for the climbers. This year, the Huon – Genesys line-up was strong and we were aiming to win stages and be competitive for overall GC. 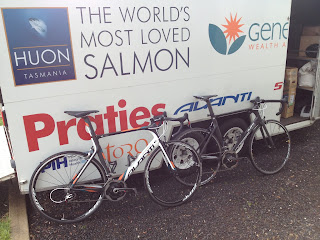 We set off on the right foot after stage one with Jack Beckinsale placing 2nd in the crit and picking up enough bonus seconds to lead the overall GC going into stage two. The wet and windy conditions in stage one made racing very tough, only 40 riders finished on the final lap, ensuring there would be a lot of tired legs on the start line for the afternoon’s Kermese around Blue Lake. 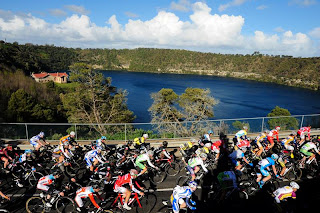 A nasty climb on the start/finish straight split the bunch every lap with many small breaks forming off the front of the main field throughout the race. The winning break included Jack Haig and Pat Shaw but with two laps to go, Jack lost contact, joining the second lead bunch which included Kane Walker and I. Pat finished 7th on the stage, I rolled home in 9th with Jack H and Kane finishing on the same time. 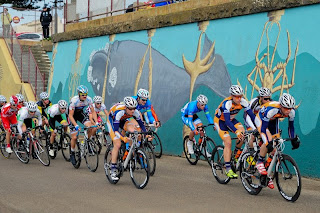 Day two was hosted by Portland with a 1.6km waterfront criterium undertaken in dry conditions. Our plan was to lead-out AJ to win the stage. Approaching the final few laps everyone was in place and I was confident we could get the job done. We decided to run off the back of Team Euride’s lead-out train, allowing them to do the majority of the work. Our modified lead-out consisted of Jack Beckinsale, followed by myself, AJ with Pat Shaw sweeping AJ’s wheel. 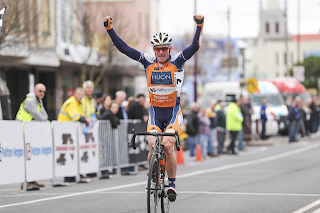 On the back straight, one kilometre to go, Jack accelerated and over-powered Team Euride’s train. I took over his tremendous turn of speed and continued to drive it home for the team with 500 metres to go. The final 500m technical finish consisted of a left, right then another hard left U-turn with 200m to go. I peeled off when exiting the U-Turn, only to be knocked off my bike by another sprinter, but AJ flew home to take the stage victory which eased the pain! The afternoon road stage was very hilly towards the end and despite the field splitting up over the climbs, the final 10km’s in head/cross winds brought the lead bunches back together for the sprint. The boys helped AJ into a perfect position approaching the final corner and he sprinted away to his second stage victory. It was a great team effort from everyone to cover moves and assist one another all the way to the finish. For the overall GC, Pat Shaw held onto 5th, I was 7th and Jack Haig was 10th. 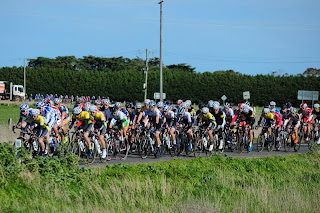 The third day of racing saw another Kermese circuit around the waterfront roads of Port Fairy which tested riders as they battled the windy conditions. The whole team rode in a good position throughout the race and in the final few laps, Pat and I tried to keep AJ safe near the front for the finish. We kept him out of trouble as best we could and he snuck up the inside on the last corner to take his third stage victory. 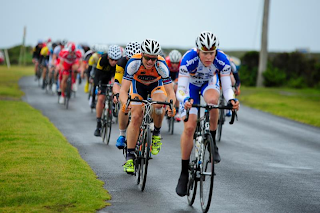 The double-stage format meant we only had one and a half hours between races so our recovery time was very short. To replenish our Energy, we consumed Torq recovery drinks, Torq bars and a ham & salad wrap (on most days). The second stage of the day was set to be a windy stage with gusts of up to 70km/hr out on the road. The profile was flat but the course was shaped in a big ‘U’ which would see two cross-wind sections, a 30km head wind straight and a 20km cross/tail wind finishing straight. The first cross-wind section split the field to bits but the bunch re-joined shortly after turning into the head-wind section. Near the end of the head-wind section, a breakaway formed with around 15 riders and included teammates Kane Walker and Tom Robinson. When the bunch turned into the 10km cross-wind section, the field split immediately once again. Jack Haig was the only other rider from our team to make the move with AJ, Pat, Jack B and I narrowly missing the front split of 20 riders. We chased hard in pursuit of the leading group but finished 1minute 50 seconds behind at the end of the stage. It was a hard race; we were caught out and missed the winning move. 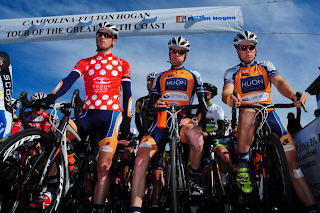 The fourth day of racing began in Koroit with a 40km Criterium to open up the legs before the afternoon’s 104km Road Race. The weather was dry in the morning but the wind was still very strong. A breakaway got clear towards the end of the race with Team Budget controlling the pace making. I got a flat tyre with two laps to go, but the race was over and we had missed the move again. 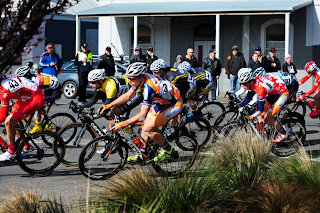 Racing from Koroit to Peterborough that afternoon, the wind was predominantly cross/tail and for the first hour, we had covered 51km’s. The undulating roads towards the end of the race ensured for a tough finish with attacks creating pressure on the leading team. Only 30 riders remained at the finish and the last 1.5 kilometres of racing was very technical. The rain was also present so the roads were very slippery when taking the off-camber corners. Eventual winner Luke Fetch escaped with one kilometre to go and he opened up enough of a gap to beat home the sprinters. 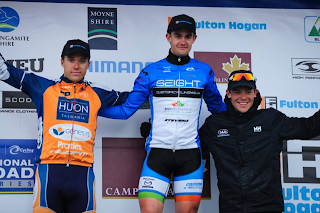 A gentle rise and tight corner with 500m to go left most sprinters isolated but I was fortunate to have my teammate Jack Beckinsale in front of me, providing me with a safe wheel to follow. I opened up the sprint and my legs were strong. Fetchy crossed the line and I followed him home in second place, wishing he wasn’t up the road in the first place. Our goal was to win the race and we came close, but not close enough. I was happy to stand on another NRS podium, but I still was disappointed to come so close to the win when I had really good legs on the day. For our team, winning is everything. 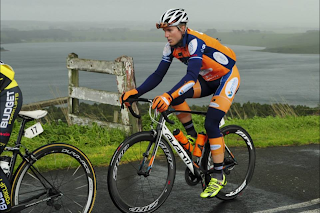 A very wet and windy day greeted us for the final race in Camperdown, where a 92km road race would conclude the 2013 Tour. The most challenging part of the course was a 1.5km climb at 7% gradient which was enough to split the field every lap. A strong cross-wind section prior to commencing the tail-wind assisted climb made the racing conditions even harder with only 40 riders in the lead bunch after the first of 6 laps. I was fighting hard over the climb each lap but my teammates Jack Haig, Pat Shaw and Jack Beckinsale were climbing very well and held their positions strong in the front group. Attacks from the stronger climbers increased the tempo each lap and it was on the final lap that I lost contact from the leading 30 riders. Only 40 riders finished the race, with Jack Haig riding a great race to place 4th. Pat wasn’t too far behind and Jack finished in the top 20. We finished with three stage wins and the KOM jersey - a good performance, but we leave a lot of room for improvement for the Tour of Murray which starts on the 3rd of September. 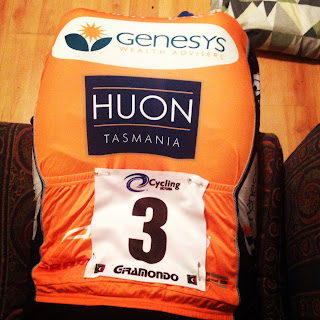 A big thank you to our sponsors and staff who support the Huon Salmon – Genesys Wealth Advisors Pro Cycling Team, we wouldn’t be successful without you. Thanks also to Diadora Australia for their support with Cycling Shoes, my Coach Matt Wallace, Mum & Dad, brothers, family and girlfriend Lucy; I couldn’t continue to race at a high level without your commitment and support. Keep posted for the Tour of the Murray race report, racing against tough competition, it should be a great tour.