A strong Huon Salmon – Genesys Wealth Advisors Pro Cycling Team took to the start line of the 2013 Tour of the North West with high hopes for this year’s 5 stage, 4 day tour. Before racing even began, some made it a race to the rooms for the usual ‘who’s scored the double bed’. With rooms sorted and bags unpacked, we settled ourselves in for the 3 night stay in Narrabri. When on tour with the team, our dinner, race food and post-race food is prepared for us and this gives us more time to focus on our recovery for the following day. 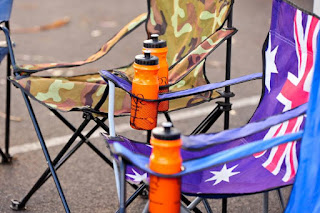 The first day took place in Narrabri with an 8.5km Individual Time Trial in the morning and a 33km Street Circuit Criterium in the afternoon. With a trailer load of race bikes, training bikes and time-trial bikes, Kane Walker, Pat Shaw and I couldn’t bring our TT Bikes. For Ben Dyball, Nathan Earle, Jai Crawford, Jack Haig and Aaron Donnelly, it was up to them to bring their Avanpti TT rig’s home with a solid result and start the tour on a high. 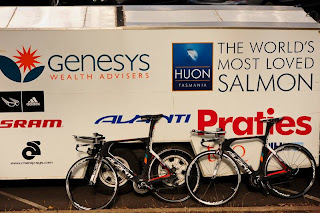 The boys didn’t disappoint either, finishing 1st, 3rd, 4th, 5th & 11th. It was a perfect start for the team and a step in the right direction for our overall GC aspirations. After a short roll out back to the accommodation, some food and a Torq Recovery Drink were the first things on my list. With 3hrs between the TT & Criterium, quality rest whilst watching some TV was the perfect choice to replenish much need energy. My legs were feeling good and after posting a very respectable time for the TT on my roadie, I know my legs would be good for the crit race. The plan was too keep the boys safe and finish with Team’s & Individual GC still in the hands of Huon - Genesys. I was left to ride a relatively ‘free’ race with Pat Shaw the only rider dedicated to help me out in the final few laps if I needed any. 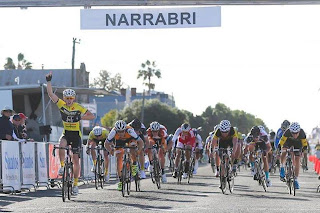 A fast yet dangerous race saw a few accidents with one big crash sparking a brief pause in the race whilst the ambulance was cleared off the course. Unfortunately, teammate Kane Walker was caught up in the big crash and had to pull out of the race. He suffered lacerations on his knee and elbow and ended up with 3 stiches in his knee that afternoon. With Kane out, we were down to 7 guys, but we managed to make it through the final few laps with all skin intact. It was a furious run to the line but despite being knocked off my line with 200m to go, I finished in 2nd place and earned my first NRS podium for 2013. It wasn’t a win but close enough and with no lead-out, my first NRS criterium race for 2013, 2nd was ok. The boys were still leading GC and we also retained the teams GC lead. 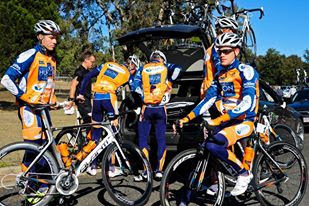 Day 2 saw stage 3’s road race undertake a 105km course consisting of 3 main climbs, the first at 6-10% and the second at 4-5% avg, both around 3-4km’s long. The pace was hot on the climbs but the peloton re-grouped on the descent and stayed together across the fast flat valley roads to the finish. 2 riders escaped with 25km’s to go and despite a strong final chase by team Budget Forklifts, the 1 riders took 1st & 2nd with the bunch sprinting for 3rd. 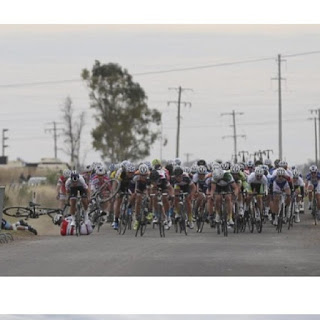 I followed Budget Forklifts sprinter Jesse Kerrison and had a great run to the line, missing the big crash with 150m to go and taking 3rd place on the stage. Another NRS podium gave me confidence with my current form and it’s good to keep learning the tactics behind sprinting and giving it your best when by yourself, without a team lead-out. Jack had slipped to 2nd overall on GC after Cam Bayly (Search 2 Retain) took the win and enough time to lead Jack by 4seconds. That night, a massage from our team Masseur Gregory Nunn aided our recovery before preparing ourselves both mentally & physically for the Stage 4 hill top finish to the summit of Sliding Springs Observatory. Two days remained, but it was today that was the most important as it would decide the overall GC for the Tour. With Kane Walker having crashed out, this left Pat Shaw, Aaron Donnelly and I to look after our 4 GC hopefuls and get them to the base of Sliding Springs as fresh as possible. 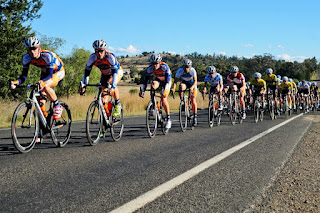 In almost textbook fashion and only 15km’s into the race, two riders escaped and quickly attained a reasonable advantage. Already riding at the front, Pat, Aaron and I took control of the pace and set a steady tempo, one that could be held for what was left of the 126km race. Our race strategy was falling into place quite nicely and my legs were feeling good. I’m not usually in a position or had an oporunity to be the ‘domestique’ for the team but today, in a tour where GC was decided by a hill top finish, I needed to be a team player and sacrifice myself for our strongest rider on the stage and the team. Dropping back to the team car, squeezing 7 full Torq Energy drink bottles in my jersey and riding straight past the bunch again was hard work but I enjoyed the experience. It was another side to bike racing at an elite level which I don’t usually see much of. In the final 20km’s, a gentle incline with rolling hills provided a taste for what was to come before the last 7km accent began. Despite catching the breakaway a little earlier than we’d like to, we managed to let another 3 riders escape and give us a carrot to chase before our jobs were done at the base of the climb. Pat and Aaron set a solid tempo on the small climbs and we split the bunch slowly but surely. 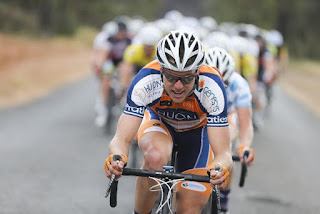 When Aaron and Pat gave it their final last efforts for the team, I kept the pace high and tried to last as long as I could. We were still 3-4km’s short of the final climb and just when I thought I had done my last turn and was blown off the back of the bunch, I found another level and rode straight back to help out my teammates at the front. Determined to do my job 110%, I pushed myself and rode the boys to the base of the climb, it was all up to them now. I let the boys ride off towards the finish knowing our work was done. Thumbs up from ACJ & Neil in the team car, I cruised up the climb and awaited the final results when I reached the finish line. 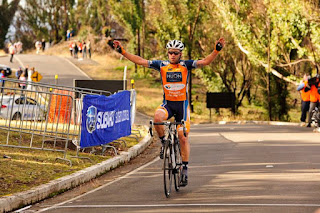 Before I even got to the team car, I heard Nathan Earle being interviewed and I knew we’d won the stage. Nathan won yet another hill top finish for the year and rode himself into the overall tour lead. A great day for the whole team, proving teamwork wins races. For Nathan, it's another sign of bigger things to come after he was recently signed by Team SKY for 2014 to join the Pro Tour. The final stage was predicted to be fast & furious with a 137km stage set to decide the 2013 North West Tour. For the whole Tour, the weather was perfect for racing and the final day didn’t disappoint with blue skies making racing ideal. All we had to do was keep the guys safe and finish together with no time lost for overall Team’s and Individual GC classifications. Team Budget looked to keep the peloton together for the sprint at 68km’s to let their sprinter Jesse, gain more points for the Green Jersey. I was on Jesse’s wheel for the sprint but decided not to contest it and save myself for what I was here to do, protect the guys in win the tour as a team. 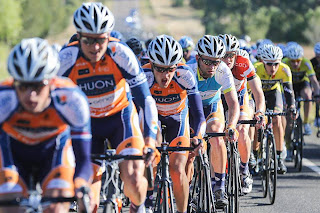 A breakaway escaped with 30km’s to go and Aaron had made the move. He was accompanied by 7 other riders and they went on to finish 30 seconds ahead of the main bunch. Pat and I kept the pace high and successfully crossed the line with Nathan who won the Tour. Aaron ended up with 3rd on the stage and we won the Teams classification which furthered our lead in the Overall NRS standings. Jack Haig finished 3rd on GC, taking the young riders jersey also. He still holds a slim lead in the Overall NRS Individual standings to fellow teammate Nathan Earle. Jai Crawford won the KOM jersey and Ben Dyball finished a very respectable 4th on GC. A job well done, another NRS Tour victory for a dominate Huon-Genesys Team. I was happy to contribute to the success, pick up a 2nd on Stage 2 and a 3rd on Stage 3 and finish the Tour with all my skin still intact. 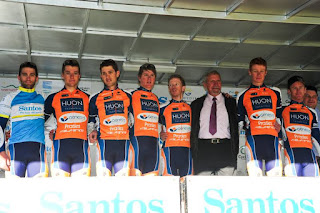 A long travel day back to Sydney saw the team depart our separate ways, but for myself, Kane, Neil & Aaron involved flying to Malaysia for the Jelajah Tour of Malaysia, 26th – 30th June. A massive thank you must go to our sponsors. I encourage everyone to check out our team’s FB page, our website and the list of sponsors on my Blog and make note of our sponsors who support our team. Maybe the next time you’re in a supermarket or bike shop, you will support them too. I couldn’t continue to chase my dreams if it wasn’t for my Mum and Dad & whole Family, supportive girlfriend Lucy, understanding friends and my Coach Watt Wallace, I appreciate everything you do for me. Keep posted for my next blog report from Malayisa, words can’t explain how excited I am to race overseas, compete against some of the best Asian & Eastern European Pro Continental Teams and hopefully come home with some good results. Enjoy watching the Tour de France, Thanks, Brenton