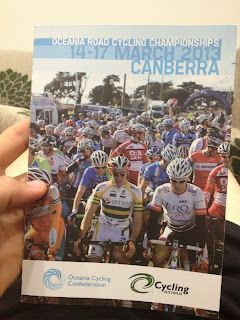 The first of many major races for 2013 began in Canberra – the well-known cycling capital city, where the Oceania Road Championships took place. When I arrived in Canberra, it was great to catch up with my teammates and share our numerous training stories from home environments. Our team routines around racing are quite simple, a team training ride in the morning generally followed by the coffee shop, some recovery time, lunch and an afternoon spent checking bikes, watching TV, writing blogs or sending emails. Following that, a team dinner and some more free-time completes a typical day in the lead up to a race for the Huon Salmon-Genesys Wealth Advisors Professional Cycling Team. The team environment in the days prior to this race was very relaxing, with most members of the team spending a lot of time watching TV (Melbourne F1 Grand Prix) or eating food to load up on carbohydrates. I find this environment the best because it takes the mind off the big race and you get enjoy your social time with your teammates a lot more. 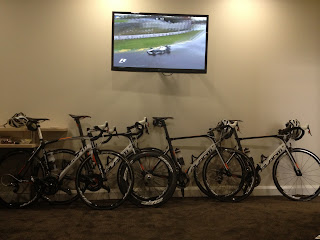 For the Oceania Championships only 9 riders would be representing Huon-Genesys as 6 members of the team were competing in Taiwan. For this event, our support team consisted Kane Walker – our teammate (not riding this event) & team chef, Neil Walker – passionate photographer & Team Manager for the weekend, Damo Harris – experienced mechanic and Team Director for the weekend as well as Campbell Flakemore and Ben Dyball’s supportive parents who assisted in the feed zone. It’s important to have a strong support team to enable the riders to relax as much as possible saving the energy for when they will need it most. A few days went by so quickly that before we knew it, the race was here. The scheduled start time was 12:30pm which is a little later than usual so we had a few more hours to relax and load up on last minute carbohydrates before the tough race ahead, a 160 kilometre road race through the hills surrounding Canberra, consisting of a 110km ‘large’ loop before six smaller loops. 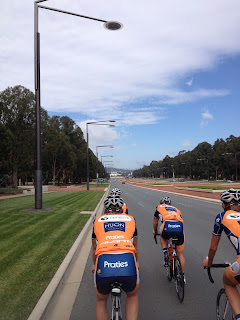 Travelling out to the start location, south of Canberra, the wind was noticeably strong and this was going to make a significant impact to the tactics within the first 20km’s. After good warm up roll, rider sign on, fresh drink bottles and some Torq Nutrition products, we were ready to race. In the first 5km’s the pace was high but attacks were controlled very early on. The rolling hills approached us fast and soon enough, we were riding the ‘roller coaster’ like roads the whole race. These short but sharp hills split the field with an early break establishing after 10km’s, containing some pre-race favourites and our very own Campbell Flakemore. 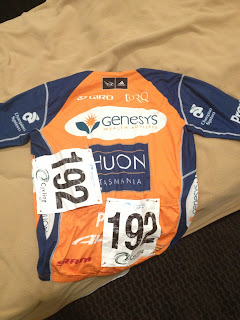 Many riders tried to get away and bridge the gap but it wasn’t until the McDonald ranges climb that the tempo increased and small groups were formed. In a chasing group, Jono Lovelock & Alex Clements represented Huon-Genesys while back in the main field a couple of minutes down were my teammates and I, Jack Haig, Ben Dyball & Jack Beckinsale. Being the 3rd group on the road behind the leading breakaway and the chasing group, we needed to bring it back to give our stronger climbers the chance of a result. We all came to the front and the colours of the orange & blue lead the charge to chase down the leading groups in front. By the feed zone at the 75km mark we had chased down and brought back the second group on the road, setting the boys up to attack on the 7% 2.5km climb right after the feed zone. The pace on the climb was too much for Jack B & I, but we had done what we could to give the boys the best chance come the finish. With the big lap complete, the race entered the national park for 6 x 9km laps of a closed circuit. Cambpell Flakemore was out in the leading break with Alex Clements, Jack Haig, Ben Dyball and Jono Lovelock forming up to chase down the leading 6 riders. Unfortunately Campbell wasn’t feeling 100% and was dropped leaving Alex, Jack & Ben to lead the Huon-Genesys chase. 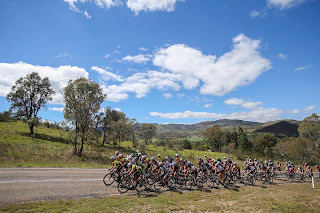 Orica-Green Edge Pro Rider Cameron Meyer & Jayco World Tour Academy Rider Damien Howson showed everyone their class out in front to take the U23 & Elite titles to finish 1-2 for the race respectively. The boys couldn’t quite bring back the leaders finishing in 6th & 7th overall with Ben finishing 4th in the elite category and Jack finishing 3rd in the U23 category. On the start line, 100 Elite & U23 riders started the race and with only 24 finishers, it goes to show how hard a day it was in the saddle. From here, we all re-group at the first couple of NRS events of the year with half of the team racing the Tour of Perth – 1st NRS event of the year and the Battle of the Border – 2nd NRS event of the year. Until then and in between these races, we train hard, recover well and compete at various club and state competitions to sharpen our form for the important National Road Series Events. Our other important races are in Asia with the team competing in the Tour of Borneo, Tour of Malaysia and Tour of Japan. I’ve raced Mountain Bikes overseas, but never my road bike, so I’m thrilled to get the opportunity to race the Tour of Malaysia in May and am looking forward to the team coming home with some success. 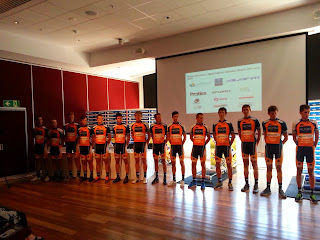 Thank you to our team staff, support crew and all of our sponsors who support the team, please make sure you support their products and visit their web pages. Thanks also to Diadora Australia for their support with clothing and shoes, I love wearing the bright and comfortable Jet Racer cycling shoes in the peloton. Last but not least, my family, girlfriend, friends and coach for your support too. I’m sure that if I continue in the right direction, I can achieve some good results this year with the team. Keep posted for my next blog report and enjoy your cycling in the meantime! Cheers Brenton