One part of travelling I dislike most is packing and un-packing but, on the other hand, I guess there are the positives. I get to travel Australia and the World visiting new destinations that inspire myself to contribute more hard work and dedication during training to do it all again.
A very carefully constructed couple of days were what it took for me to ensure everything was included into my gear bags. 2 bike bags, a gear bag and back pack were enough to fill my own aeroplane so, as usual; excess baggage was charged by Qantas Airlines - cheers. 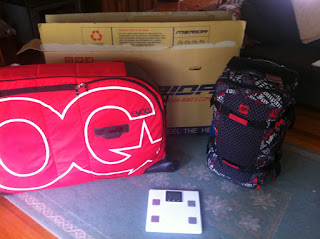 After a small donation to Qantas, my coach Matt Wallace and I were on our way to the beautiful town of Queenstown located in the south west of New Zealand’s south island.
Not only is Queenstown a popular winter location for the snow season, it also offers a range of summer activities to keep the whole family entertained (*note to mum & dad: Family holiday booked already? I think so). 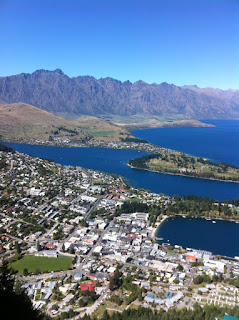 Aside from the magnificent scenery, broad range of fun activities and a sweet apartment, I was here for a reason, to race! On Friday was the Time Trial event, a 37km Individual race of pain against the clock to see who would be the fasted man to cover the distance. The time trial is a discipline that I don’t specialize in, but I definitely don’t disappoint in either. The course profile was relatively suited to a powerful rider with flat roads, short steep climbs and rolling terrain. On race day, I was focused yet very relaxed whilst drinking coffee and having a good chat about my race strategy to Matt. I was the first rider off with riders departing the start at 1 minute intervals. When I lined up on the start line, I knew that my preparation was good and all I had to do was follow my race strategy and I’d post a respectable time. The first 12km’s straight out of town consisted of a mixture of flat sections and rolling hills. I rode smart to save my energy but still maintain a fast average speed during this section. 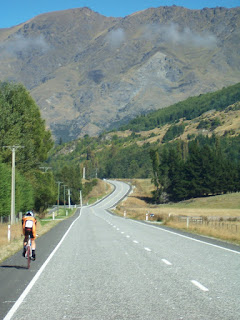 Approaching the halfway mark, I was feeling good and I knew that for my time-trial ability, I was going to post a good time. A short but very steep climb almost killed the already burning legs with 10km’s to go, but I dug deep to record a strong time of 49 minutes, 57 seconds – 10th place in the 2012 U23 Oceania Time Trial Championships. I was happy with my performance and I look forward to riding faster in the next Time Trial.

With the road race on Sunday, Saturday was all about recovery and getting my mind off the task ahead. For Matt and I, this meant a nice morning ride through the amazing countryside and surrounding towns. We then made use of our short time in Queenstown to explore some of the local activities and shopping strips. On the list was a steep Gondola ride to the summit of Ben Lomond followed by incredible views. The Skyline Luge, 800m of banked corners, dips and switchbacks…..the ultimate adrenaline rush! This was our next activity and despite being a risky activity before my race, I stayed upright and the body was still in one piece ready to go the next morning. 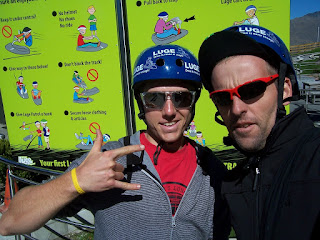 The morning of the road race was kicked off with a light spin on the bike, followed by a Latte at the local coffee shop. After a big breakfast, we packed the car and headed out to the start of the race which was a short 10 minute drive away from our apartment. The weather was overcast with a slight drizzle which made race conditions a little more difficult. 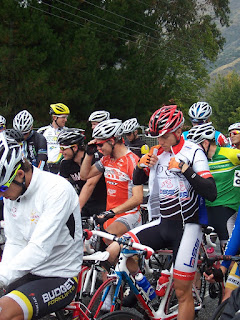 On the start line, I was a little nervous but at the same time, ready to race. As we set off on lap 1of 6, it was only about 1km before we hit the most challenging part of the course – a steep little hill, reaching a small 18% gradient and lasted around 3 minutes at a fast climbing race pace. The first time up, I followed riders to the front of the bunch where I managed to stay in the top 5 riders the whole way up and over this painful section of the course. Shortly after, we hit the flat roads and before I knew it, I was in the early break, just what I had planned to do! It wasn’t until lap 2 that tactics from the stronger teams (Jayco AIS & Budget Forklifts) played a big part in this success of this early break. I knew that it would come down to this kind of race and it was made more difficult because we (U23 Riders) were racing with/against the Elite riders as well. The teams ride together, support each other and they will work you over if you’re an individual rider. For this race, it was definitely all true and the AIS boys dominated the race using the strength of their team. With no-one to back me up and help me ride a race to win, I had to attempt to do it all alone. Our initial lead group splinted and when I tried to attack I was chased down by the teammates of riders in the breaks. This continued and with 3 laps to go, I managed to hold my position up the front with most of the remaining contenders left in the race. There were 6 guys up the road and on the last lap, I was in contention for the Bronze medal as only 2 riders in the lead group were under 23. The pace was fast going over steep climb for the last time (18% hurt me this time) and 6 riders got away. I was left behind with another 5 riders whom all contributed to bring these 6 riders back anyway. It was hard work and my legs were dead, 15km’s to go and I was spent. It was then, that the 2nd climb on the course destroyed my day. The attacks up the climb were too much for me and after 140km’s of hard racing, my legs were dead. After 4hrs in the saddle fighting through a world of discomfort and pushing yourself to the limit, only 1/3 of the field managed to finish the race. I managed to fight hard to the finish line in 7th place in the U23 category. 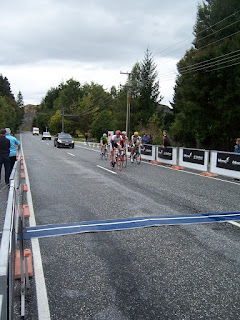 I believed I could make the podium though, and to add to the disappointment of losing contact with the ‘bronze medal bunch’ in the final 15km’s, I somehow (on the last lap or possibly even the 2nd last lap) managed to have one of my rear spokes come loose causing a buckle in the rear wheel and resulting in some serious brake rub (resistance that was not needed). Normally you can see, feel and/or hear these mechanicals, but I had none of those signs at all! Wouldn’t someone tell me I had a buckle in my rear wheel? Hmmm….you have to wonder (mental note taken for future payback). This wasn’t the reason I didn’t finish 1st or 2nd, but definitely the reason I couldn’t finish 3rd.

At the end of the day, it was a great experience and you learn something from every race. I was pleased with my racing but disappointed not to get the result I was after in the road race. In saying that, a quality field, difficulty of having no teammates yet still finishing the race in 7th place shows that my plans are well on track and a big year is still in front of me. 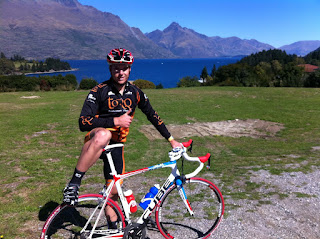 A Short Video of the Road race can also be found using the following link:
http://www.youtube.com/watch?feature=player_embedded&v=7qnpOUfcxes&noredirect=1#!

Thanks to my sponsors, Torq Nutrition, SRAM, Monza Imports, my coach Matt Wallace who supported me during this trip and most importantly to my family for their support and contribution to funding my travels which I could not be where I am without.
Keep posted for my next race report, I hope those of you who follow enjoyed the read.